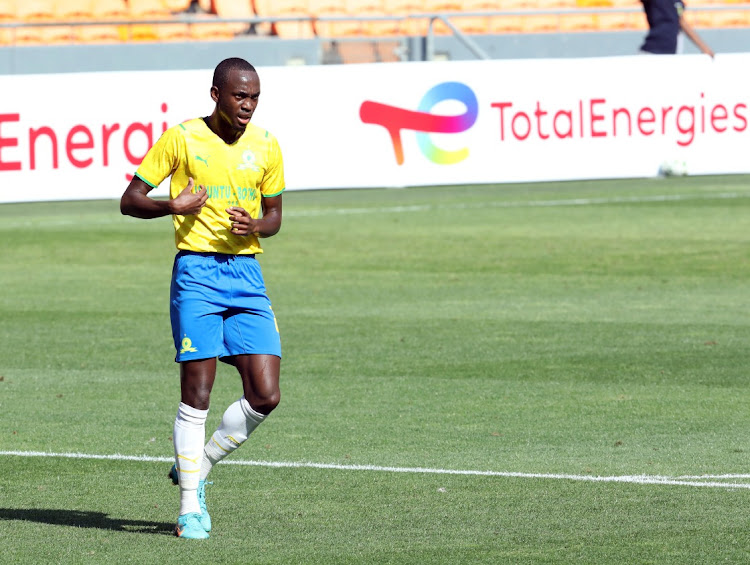 Finally! After a frustrating 10-season wait the elusive 20-goal mark has eventually been breached by a Premier Soccer League (PSL) player. And it’s no surprise that it was the prolific Mamelodi Sundowns striker Peter Shalulile who managed to scale the heights that were last conquered by former Bafana Bafana striker Siyabonga Nomvethe who, while playing for Moroka Swallows in the 2010-11 season, netted 20 goals.

When he completed his hat-trick in the 6-0 rout of Golden Arrows at Loftus Versfeld last Tuesday, the 28-year-old Shalulile scored his 21st goal of the campaign. In doing so he also became the first player since the inception of the PSL in 1996 to complete successive hat-tricks after his triple strike against Swallows FC in Sundowns’ 4-2 win the previous week.

The next target for the Namibian sharpshooter is the PSL record of 25 set by former Kaizer Chiefs striker Collins Mbesuma in the 2004-05 season. With five games remaining and with both team and striker in imperious form, the bulky former Zambia international’s seemingly insurmountable record is on shaky ground for the first time in 17 seasons.

With five games remaining and comfortably ahead of Royal AM striker Victor Letsoalo who is in second place on 14 goals (which include six penalties), the Namibia international is a shoo-in to match Mbesuma’s record of two Golden Boot awards that he won in 2005 and 2016.

Who knows, with the form Shalulile is in and with the way Sundowns have been overpowering the opposition, the Namibian could also still equal the late Richard Henyekane’s record of three hat-tricks in a season that the former Golden Arrows striker achieved in the 2008-09 campaign.

Incidentally Manqoba Mngqithi, the current Sundowns co-coach, was in charge of Abafana Bes’thende when Henyekane blazed his way to the Golden Boot with a healthy 19 goals so the omens are good for Shalulile.

The closest anyone has come since then is the 16-goal mark that was reached by the last three Golden Boot winners — Mwape Musonda (Black Leopards) in 2019, Gabadinho Mhango (Orlando Pirates) and Shalulile (Highlands Park), jointly in 2020 and Bradley Grobler (SuperSport United) last season.

Thank heavens for what seems to be a heavy goalscoring bar finally being raised, especially considering that 11 goals were enough for Percy Tau and Rodney Ramagalela to jointly top the scoring charts in 2018 and when a record low of 10 was sufficient for Bernard Parker to claim the Lesley Manyathela award in 2014. Bizarrely in that season, Golden Arrows midfielder Thanduyise Khuboni finished joint second with eight, all of which were scored from the penalty spot.

As welcome as Shalulile’s entry into the long-uncharted territory of the 20s in goalscoring terms is, it’s also a poor reflection on the lack of top quality attacking play and goalscoring ability that it’s taken so long for this milestone to be reached.

Of course, it could be argued in mitigation that the PSL has a short league campaign comprising only 30 games over two rounds, and with players likely to miss a few games through injury or other reasons, they have to average close to a goal a game to reach the magical 20-goal target.

Still, the paucity of goals amid rigidly defensive game plans employed by many teams in the league who see this as the best way to ensure their survival in the top flight is a big concern. This is vividly illustrated by the fact that the 21 goals netted by Shalulile now eclipses the hauls of each of the bottom seven sides on the log.

In fact, only half the league’s 16 teams have scored more than a goal per game. And as the campaign winds to its normally tense denouement with so much at stake, fans are hardly likely to see goalkeepers picking the ball out of the net too many times between now and the last day of the season on May 21 amid the caution that normally characterises the tense end-of-season encounters.

A major concern for local football administrators is how foreigners have overshadowed their local counterparts in the goal-scoring stakes. No fewer than 12 imports (including Shalulile and Mhango sharing the award two seasons ago) have walked off with the Golden Boot award since the inception of the PSL.

In many ways it’s a reflection of the hard work put in by the foreign (mainly African) players who are prepared to put in the hard yards to take the next step in their careers.

It’s telling that Shalulile was praised by his coach Mngqithi for his hard work and commitment that has been rewarded despite him not being the most talented player in the squad. Therein lies the rub for many SA players who undoubtedly have the talent but perhaps do not appreciate the hard work that’s required to reach the top and to remain there.