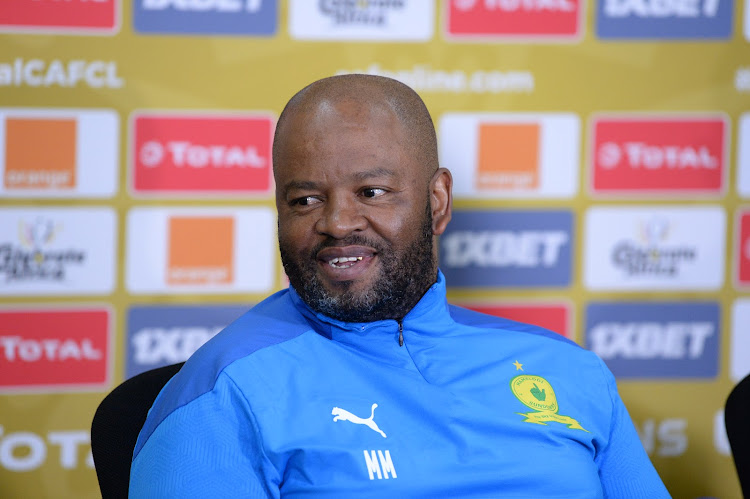 Mamelodi Sundowns coach Manqoba Mngqithi says they will continue to rotate the squad to carefully manage players in their quest for an unprecedented quadruple.

The Brazilians‚ who have already bagged the MTN8 cup and are favourites to lift their fifth successive Premier Soccer League (PSL) title‚ are in the semifinal stage of the Nedbank Cup and have reached the quarterfinals of the Caf Champions League.

Sundowns have another big week‚ meeting Lamontville Golden Arrows in the league at Loftus on Tuesday (3pm)‚ a match that can serve as an effective warm-up for the first leg of their Champions League quarterfinal against Petro de Luanda in Angola on Saturday.

Mngqithi said it is important to rest players because of the number of games they play as the Brazillians remain in four competitions.

“We understand we have a serious number of matches to be played‚” he said. “I must give credit to the other coaches and the players because we are in that mode where we are comfortable to rotate without any fear we are tampering with this thing [the rhythm of the team] and it might cause problems for us.”

As Sundowns brushed aside amateur side Summerfield Dynamos 5-0 to advance to the Nedbank semis‚ the Pretoria team’s coaches started the match without the experience of Denis Onyango‚ Lyle Lakay‚ Themba Zwane‚ Mothobi Mvala‚ Andile Jali and Peter Shalulile.

“That is why by now we have played more than 32 players during the season‚ which is very positive for us. Players like Peter Shalulile and Themba Zwane understand we have Golden Arrows on Tuesday in the league‚” Mngqithi said.

“It is an important match for us and we want to make sure this thing [wrapping up the title] takes direction quickly‚ and we believe we can win this match against Arrows because we have a lot of quality.

“At times people say you are playing fringe players‚ but when you look at these fringe players they are talking about‚ they are probably national team players almost from start to finish.

“Everybody believes they have a chance to play. We must show that because it helps us. With the number of games we have‚ we have a bit of latitude to say let’s play this team against Al-Merrikh‚ this team against Summerfield and maybe we have the same team to meet Arrows‚ and then we go to Angola with another team.

“It is something that is working and everybody plays minutes and has big match temperament because everybody has match fitness. Everybody has played over the last three matches and that helps us.”