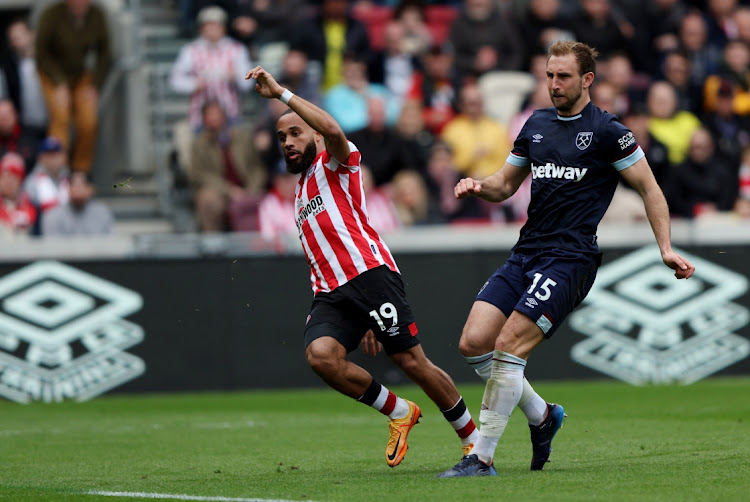 London — Brentford continued their resurgent form by beating West Ham United 2-0 at home on Sunday to rack up a fourth win in five matches and take another step towards guaranteeing their Premier League survival.

Fresh from their shock 4-1 win at Champions League holders Chelsea last week, Thomas Frank’s side overwhelmed another side with European ambitions, Bryan Mbeumo opening the scoring in the second half before top scorer Ivan Toney doubled the lead.

Brentford struck first after quick thinking following a throw-in as Toney slipped the ball into the path of French forward Mbeumo, who slotted into the net with a first-time finish in the 48th minute.

Mbeumo repaid the favour by crossing for Toney to head home from close range in the 64th and the Frenchman could have added another goal but sent a volley from inside the area fizzing over the crossbar.

Brentford’s lead was rarely threatened by a lethargic West Ham side and they comfortably saw out the win to climb to 13th in the table on 36 points, 12 clear of the relegation zone.

Frank’s side lost seven games out of eight before turning the tide with a 3-1 win at Norwich City in early March and there was a euphoric mood around the stadium as the players went over to the fans behind the goal to celebrate.

“When you are a newly promoted side, with the lowest budget, you have to celebrate every win,” Frank told a news conference.

“This was the first game in the Premier League where we controlled it from the first minute to the 90th. Winning 2-0 against a very good side in West Ham who are fighting for the top four and the Europa League is very pleasing.”

The result was a further blow to West Ham’s hopes of finishing in the top four as they were left sixth on 51 points, six behind fourth-placed Tottenham.

“I don’t have any complaints, we weren’t at it from the start,” West Ham manager David Moyes said.

“There are mitigating circumstances, we had a tough game on Thursday and the Thursday-Sunday schedule is not ideal. The most part has been good but today felt like one too many.”

Midfielder Kiernan Dewsbury-Hall set up Leicester City’s first goal and scored a sublime second as they leapfrogged opponents Crystal Palace to go ninth in the standings after a tense 2-1 win at the King Power Stadium.

Dewsbury-Hall picked up the ball in midfield and threaded a well-timed pass for winger Ademola Lookman, who fired past Palace goalkeeper Vicente Guaita with 10 minutes remaining in the first half to score his first goal since February.

Palace defender Marc Guehi miscontrolled the ball in his own half, allowing Leicester forward Patson Daka to find Dewsbury-Hall. The midfielder curled a powerful shot from 16m to score his first Premier League goal seconds before halftime.

Wilfried Zaha gave Leicester reason to sweat after halving the deficit in the 65th minute, heading in the rebound from his retaken penalty after his first attempt was saved by Kasper Schmeichel.

Palace were awarded a spot-kick when Youri Tielemans tripped Jordan Ayew and Schmeichel had pushed away Zaha's effort but the penalty was retaken after a VAR check that spotted encroachment from Leicester defender Caglar Soyuncu.

Leicester weathered the visitors’ attacking spells to see out the win and move into ninth in the standings with 40 points and two games in hand over Palace, who are three points behind in 10th place.