Striker is doubtful for Bundesliga clash against RB Leipzig 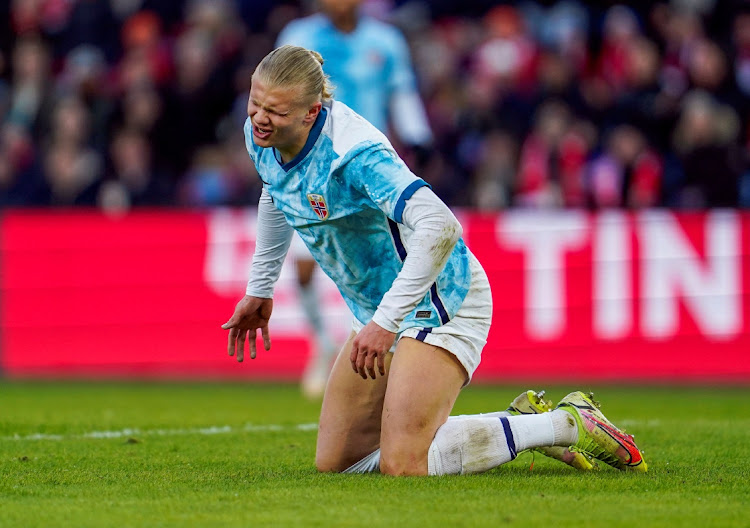 Berlin — Borussia Dortmund’s slim hopes of claiming their first Bundesliga title in a decade have suffered a blow ahead of Saturday’s clash against RB Leipzig with striker Erling Haaland doubtful for the match, coach Marco Rose said.

Haaland was injured in Norway’s 9-0 victory over Armenia in their friendly international on Tuesday, turning his ankle and being substituted.

“Erling is very, very doubtful and I am being honest here,” Rose told an online news conference. “Erling is always very optimistic but his ankle is swollen and blue. We have to see today and tomorrow but at the moment it is still very swollen.”

A loss to Leipzig, locked in a fierce battle for a top-four finish and a Champions League spot, could leave Dortmund nine points adrift with six games to play, all but killing any chances of catching the Bavarians.

“We want to get the maximum out of this season. We want to win all remaining games,” Rose said.

After more than two years, Dortmund can again count on a sold-out stadium with 81,365 fans expected after an easing of Covid-19 restrictions.

“We are hugely excited to have a full house after more than 700 days,” Rose said. “It can give us a big boost.”

Rose is in his first season at the club, with Dortmund having been eliminated from the Champions League in the group stage and also losing to Rangers in the Europa League.

Victory over Leipzig would mean an almost certain Champions League spot for next season — a minimum goal for the club — with the top four teams automatically advancing to the competition's group stage.

Leipzig, who are fourth on 45 points, ahead of Freiburg on goal difference and one point in front of Hoffenheim, have turned their season around since the arrival of coach Domenico Tedesco.

Tedesco took over in early December, succeeding Jesse Marsch, with last season’s Bundesliga runners-up in 11th place at the time and their campaign all but derailed after also suffering a Champions League group stage elimination. They have since won eight of their 13 games under Tedesco, losing twice.