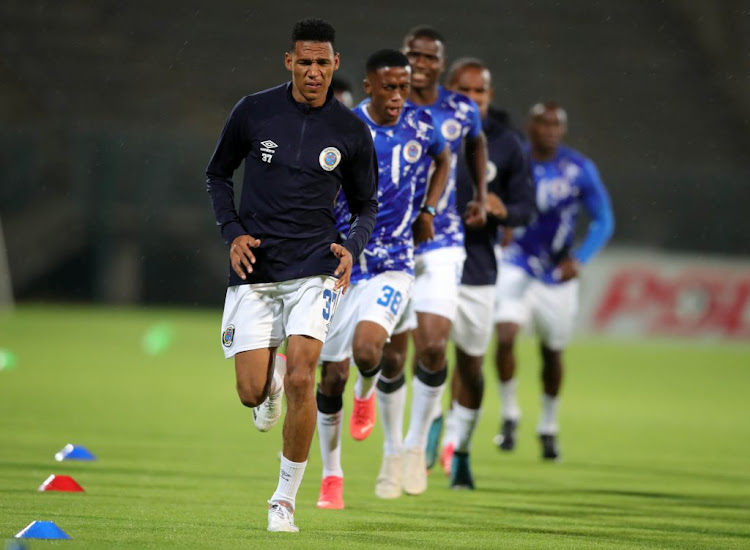 BACK TO BASICS: SuperSport United have lost experienced quality players who have not been replaced.
Image: Samuel Shivambu/BackpagePix/Gallo Images

Kaitano Tembo is on a mission to rebuild SuperSport United as the three-time champions struggle to plug the gaping holes left by the departure of influential players.

Tembo may have lost the match, but he was brave to start with nine players aged 20 to 26, with 19-year-old attacking midfielder Thapelo Maseko making his debut off the bench as Matsatsantsa went down 2-1 in a Premiership clash against Maritzburg United in Pietermaritzburg on Tuesday.

The only veterans to start were 36-year-old defender Onismor Bhasera and goalkeeper Ronwen Williams, who at 30 is at the peak of his powers.

While 22-year-old Jesse Donn scored his first goal for the club, Tembo admitted the lack of depth and experience was duly exploited by coach Ernst Middendorp’s more experienced squad.

“I am happy for him [Donn], but he will be the first one to agree that today he did not play well,” said Tembo.

The defeat left his side stuck in seventh place on 26 points from 18 matches, 22 points behind leaders Mamelodi Sundowns.

“It is a process because we have a very young team. We will continue to encourage and build them.

“You saw when we brought in the young Thapelo Maseko for his debut, we have to take that route [of rebuilding].

“It was just unfortunate for Thapelo to come in a game like this [with SuperSport trailing 2-1 and  13 minutes remaining], but I think that is a process of learning.

“You could see that he was a little caught up in the moment and did not really touch the ball, but like I said it is a process, and for him it is a learning curve and he will get better.

“We will try to build him because we believe he has the talent,” Tembo said.

Sifiso Ngobeni, the 25-year-old marauding left-back who joined SuperSport on loan from Sundowns last month, had a tricky debut for a player low on confidence from warming the star-studded Sundowns bench.

“With Sifiso I wanted him to go a bit higher up because we were chasing the game, but technically he is better because he is more of an attacking fullback,” said Tembo.

“That is what I wanted him to do as we were a goal down at that time and so we needed to try to get back in the game. He did not do enough of that, but with time he will be OK.”

SuperSport’s next match is on February 27 at home against the stubborn Royal AM. Tembo hopes the long breather will allow the team to clear the sick bay.

“We will probably be able to get some of our players back, like Thamsanqa Gabuza and Kegan Johannes, so this break will give us an opportunity to do that.”

His stocks in experience and quality were further weakened in the January transfer window when they lost their best player, Teboho Mokoena, to Sundowns.

Tembo will look to 22-year-old Donn and 21-year-old Jamie Webber to fill the void left by Mokoena in midfield.

Tembo is in his fourth season in charge of SuperSport. The club finished fifth, sixth and fifth under him, but he had already established himself by winning the MTN8 in his second season in 2019, after losing in the final the previous year.

SuperSport won the last of their three successive Premiership titles in the 2009-10 campaign under Gavin Hunt.