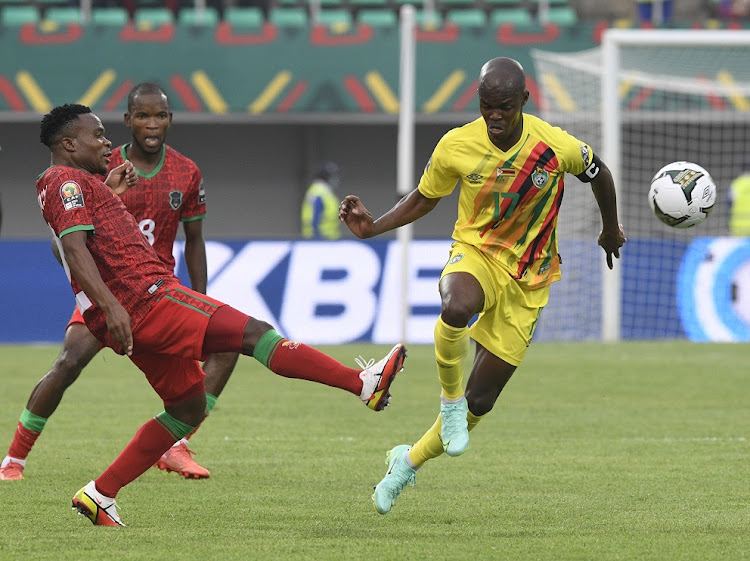 Knowledge Musona of Zimbabwe is challenged by Stanley Sanudi of Malawi in the 2021 Africa Cup of Nations match at Omnisport Stadium Bafoussam in Cameroon on January 14. Picture: SYDNEY MAHLANGU/BACKPAGEPIX

Zimbabwe will play their last game at the Africa Cup of Nations in Yaounde on Tuesday and then head home to an uncertain future, including suspension by Fifa.

Their unexpected 2-1 loss to Malawi on Friday means Zimbabwe are condemned to last place in their group after losing their opening two matches at the tournament in Cameroon and will be heading home after a disappointing mission.

Zimbabwe’s participation was under a cloud of uncertainty with the threat of a Fifa suspension and will not have made things easy for their squad.

World football’s governing body had set January 3 as the date for the restoration to their posts of the members of the Zimbabwe Football Associations’ executive who had been removed by government order.

Fifa takes a hard line against government interference in football association affairs and warned Zimbabwe’s Sports and Recreation Commission the country would be suspended from all football activity unless they stepped back.

But the commission looked determined to clean up “corrupt officials” and boasted it is not concerned about any consequences.

If a Fifa suspension is imposed in the coming weeks, it will mean Zimbabwe cannot compete internationally, affecting not only the national team but also all junior sides.

Zimbabwe have qualified for the past two Cup of Nations finals and were seen as a potential growing force in African football, given an abundance of talent, many of whom play in SA.

However, coach Norman Mapeza, who was roped in belatedly during the World Cup qualifiers in September, decided to leave behind players such as Terrence Dzvukamanja of Orlando Pirates, Knox Mutizwa from Lamontville Golden Arrows and Mamelodi Sundowns’ fullback Divine Lunga. Kaizer Chiefs star Khama Billiat quit the national side on the eve of the tournament.

It meant a weakened side went to Cameroon and coupled with continuing frustration over poor management of the team, Zimbabwe delivered underwhelming performances.

It started in the World Cup qualifiers between September and November where they finished last in their group behind Ghana, SA and Ethiopia.

Since beating Botswana last March to book their place at the Cup of Nations finals in Cameroon, Zimbabwe have gone 14 games without victory.

The country’s football has also been hard hit by the tight restrictions during the Covid-19 pandemic, with the league shut down for about 18 months. It has only just restarted.