Coach knows his squad are under pressure as they face a barrage of games, so some got a rare start against Swallows and others were rested 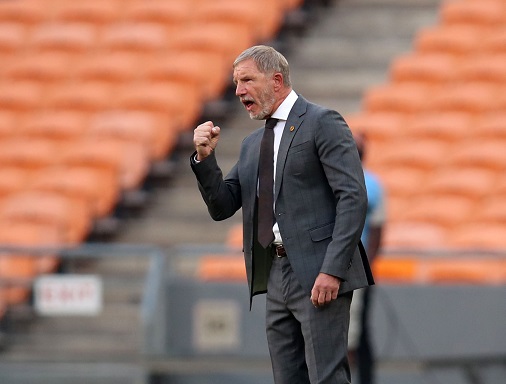 Stuart Baxter says Kaizer Chiefs have something to shout about ahead of their next game against Eric Tinkler's Cape Town City at home. Picture: Muzi Ntombela/BackpagePix/Gallo Images

Kaizer Chiefs coach Stuart Baxter says he had to rest some players against Swallows as he was aware of the pressure on the squad with matches coming thick and fast, and admits he will have a “good problem” when selecting the team to play Cape Town City at home on Saturday.

Baxter gave rare starts to Kearyn Baccus and Happy Mashiane, and the pair impressed, with the former finishing the match and the latter limping off with 20 minutes remaining with what looked like a foot injury, as Chiefs overwhelmed Swallows 3-1 in the Soweto derby in Dobsonville on Sunday to move to second on the Premiership table.

A brace from man of the match Khama Billiat and a sixth league goal for Keagan Dolly took Chiefs to 22 points from 13 matches, eight behind runaway leaders and defending champions Mamelodi Sundowns, who have played a game less.

“It was a very difficult game, the pitch was troublesome, the wind was very strong and it made good football quite difficult, but we produced three classes of excellence which brought us the three goals,” said the Briton who was in charge when Chiefs last won the title in 2015.

“I think we managed the game quite well as it went on. I am a bit upset that we conceded a goal,” Baxter said of Lebohang Mokoena’s consolation goal.

“It was a bad mistake for us to concede that goal, but all in all 3-1 in the Soweto derby away from home is a good result.”

Baxter made five substitutions in the last 20 minutes, with 21-year-old Sabelo Radebe, Siphosakhe Ntiya-Ntiya, Lebogang Manyama, Kgaogelo Sekgota and Siyabonga Ngezana all coming off the bench with Swallows already dead and buried.

Baccus started alongside Anthony Agay in central midfield, usually manned by regulars Phathutshedzo Nange and Cole Alexander. With another regular, Njabulo Blom, coming back from suspension, Baxter will have a selection poser for the Cape Town City match at FNB Stadium.

“It is one of those situations where the lads you think are the starters have got to make sure they are up for it because the other lads are breathing down their necks, which gives me a good problem.

“With these three games we have had in such a short space of time the load on the players is enormous,” said Baxter.

“We were conscious of that,  and that is why we had a lot of changes to start with. We tried to ease the load towards the end of the match as well.

“I thought Kearyn was excellent in his role. Ntiya-Ntiya came on and had a little cameo. So, yeah, it was good,” he said.

“The front three of Billiat, Dolly and Bernard included, they all did very well, and they pressed very well in the first half and that resulted in us getting a couple of very good chances.

“If you give them an inch they will take a yard. They found themselves a bit of space and the three goals was the result.”