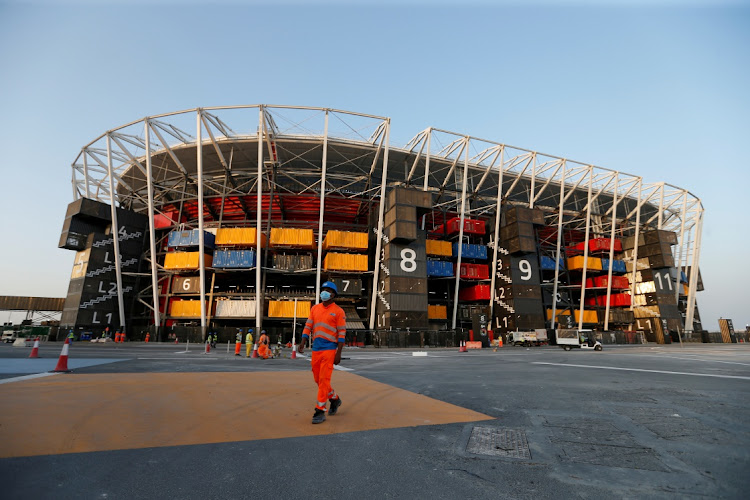 A worker walks in front of Ras Abu Aboud Stadium, one of the venues of the Qatar World Cup 2022, in Doha, Qatar. Picture: REUTERS/HAMAD I MOHAMMED

As the nation continues to wait for the Fifa disciplinary committee to announce its decision on the dispute between SA and Ghana‚ it has emerged that the Confederation of African Football (Caf) is considering moving the 2022 World Cup playoffs to Qatar.

The Caf executive committee will meet in Cairo on Friday and it is understood the continental body wants to abandon the traditional home-and-away format that has been used over the years to decide the five teams to represent the continent at the global showpiece. This idea will be at the top of the agenda when the continental body meets.

“It has emerged that the Caf executive wants the games to be played as a one-off‚ instead of over two legs‚ and the idea is to play the games at a neutral venue rather than here [in Africa]‚” an insider said on Wednesday.

“Qatar is the preferred venue because the World Cup will be played there next year anyway. This [suggestion] is intended to eliminate shenanigans and other underhand things that could happen when so much is at stake. So it is likely that these games will be played in a neutral venue.”

The insider said the poor officiating that has dogged some games during the qualifiers has made a lot of nations nervous as qualifying enters the home straight. SA is one of the nations that have complained about the performance of the match officials after Bafana Bafana crashed out of the qualifiers following some dubious officiating in a decisive match against Ghana in Cape Coast this month.

The SA Football Association (Safa) suspects that Bafana’s 1-0 defeat to Ghana may have been fixed‚ and the sports body has asked Fifa and Caf to investigate the conduct of the match officials.

Incensed Safa officials have maintained  they will not take the outcome of the match lying down and they want action to be taken against Senegalese referee Maguette Ndiaye and his colleagues Samba Elhadji Malick (assistant one)‚ Camara Djibril (assistant two) and Gueye Daouda (fourth referee).

The world football governing body’s disciplinary committee met in Zurich‚ Switzerland‚ on Tuesday to decide whether Bafana’s hopes of making it to the playoffs would come to an end or be reignited. The committee is yet to emerge with an outcome.

The dates for the playoffs draw will be announced after the Caf meeting in Cairo on Friday. The teams will be seeded according to the Fifa rankings.

The insider said given that the Africa Cup of Nations will be held from January 9 to February 6 in Cameroon next year‚ the mooted plan to play the playoffs as a one-off is also intended to avoid overloading the players ahead of a major tournament.