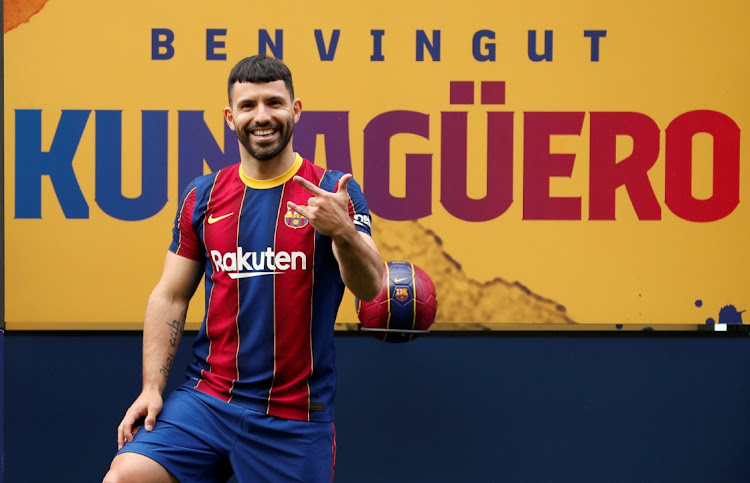 Barcelona — Sergio Aguero is finally set to make his Barcelona debut at home to Valencia in La Liga on Sunday and the Catalans will be hoping the prolific Argentinian can lift their spirits after a dismal start to the season.

Aguero joined Barca on a free transfer in the close-season after a trophy-laden decade with Manchester City in which he became the fourth leading scorer in Premier League history and struck 260 times to become the club’s all-time top scorer.

But the excitement of his arrival was quickly overshadowed by Lionel Messi’s shock departure in August, which was soon followed by Aguero, a close friend of the former captain, injuring a calf muscle.

He resumed full training this week and is expected to be on the bench when Barca host Valencia looking to respond to their 2-0 defeat at Atletico Madrid before the international break.

Aguero’s return comes at an ideal time for Barca, who have one win in their past six games in all competitions and failed to score in four of them.

Still one of the most clinical finishers around, Aguero’s cold-blooded efficiency in the area could certainly benefit Ronald Koeman’s side, who are creating remarkably few chances this season.

They failed to have a shot on target in each of their 3-0 defeats in the Champions League to Bayern Munich and Benfica respectively and only tested Atletico keeper Jan Oblak twice in their loss to the champions.

Barca can expect Aguero to make the most of any chances that fall his way and help them return to playing the flowing football their fans demand rather than the direct style they have been attempting this season.

Aguero, meanwhile, has his own point to prove after struggling with fitness problems for most of the past 12 months, in which he had to endure eight setbacks including two knee injuries and a long period out due to coronavirus.

The 33-year-old also expected to be playing with Messi and in a side challenging for the title rather than in one that is ninth in the table and bottom of their Champions League group.

“The majority of players want to wear this shirt, whether Barca are doing well or badly. I arrived with the expectation of playing with Leo and that a big team would be assembled, which was the club’s aim,” Aguero told newspaper El País on Thursday.

“But you can only be a starter when you are playing well and helping the team. That’s what I’m thinking about, helping the team with a goal every time I play regardless of the changes the team has undergone, among them Leo’s departure.”

Elsewhere in La Liga, Real Sociedad have the chance to go three points clear at the top when they host Mallorca on Saturday.

Leaders Real Madrid and second-placed Atletico are not playing after their matches were postponed due to La Liga’s rift with Fifa over South America’s World Cup qualifiers.