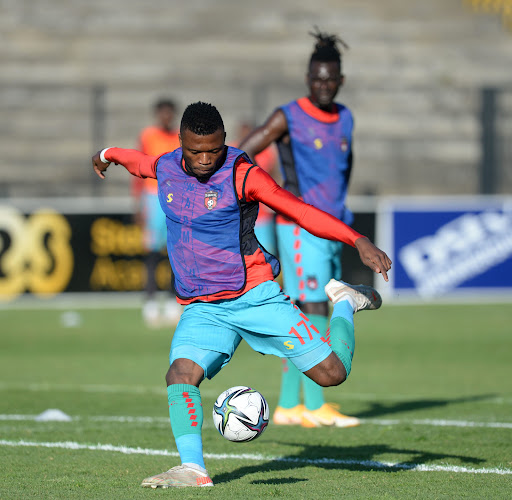 TS Galaxy marksman Augustine Kwem hopes the Mpumalanga side will turn the corner when they host the unpredictable AmaZulu in a Premier Soccer League match at Mbombela Stadium in Nelspruit next Tuesday.

The 26-year-old hitman, who joined Galaxy from Eastern Cape-based outfit Chippa United at the end of the 2020/2021 season, believes new coach Sead Ramovic ticks all the right boxes as they try to move off the foot of the table.

The Nigerian-born striker scored one goal and made an assist in a friendly game against an amateur team as Ramovic prepares the Rockets for the resumption of the league programme after the Fifa break.

“He [Ramovic] is tactical and really knows his football. You can see this from his credentials,” he said. “We are getting there, hopefully, and we won the friendly we played recently. So it’s also a step in the right direction.”

Kwem said the international break helped them to work on their mistakes. The team used the break to get to know the new coach.

“It’s back to the drawing board for us and we are preparing well,” he said. “I am trying to push myself back into the team after a small injury scare.

“We will turn things around, starting with a win against AmaZulu [next week]. If we win the next game, we will start collecting points.”

The former Chippa man asked his teammates to lead by example and said the team do not deserve to be at the bottom of the  standings.

“The experienced players must also come to the party because they’ve been around and know how to handle tense situations,” he said. “We have to show a sense of maturity and not be too clever. The team needs me.”

Galaxy have four losses and two draws from the six matches they have played this season.