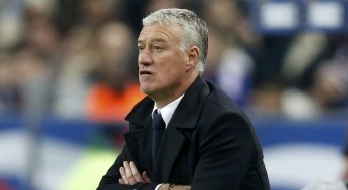 The heat was on France after their limp exit from Euro 2020, but after steering the team to Nations League glory coach Didier Deschamps showed that he is still capable of learning lessons and can inspire the world champions to yet more success.

“We are together,” was Deschamps’ response when facing questions about his future after Switzerland’s penalty shoot-out victory over France at the last-16 stage of the European Championship in June.

Many felt it was time for a change. Nine years at the helm is a lifetime in the coaching world, and having tried and failed to implement a new formation at Euro 2020, reports in the French media suggested Deschamps' time was up.

French Football Federation president Noel Le Great backed the former midfielder, but an improvement was still needed. Trailing Belgium 2-0 in their Nations League semifinal last week, with Deschamps' 3-4-3 system again looking porous, the writing appeared to be on the wall.

But Deschamps stuck to his guns and France dug in. Criticised for their over-confidence when 3-1 up against Switzerland, France showed great determination to come back and beat Belgium, before taking home the Nations League trophy after another comeback success over Spain.

The match-winner against Belgium, Theo Hernandez, vindicated Deschamps' decision to change things up, proving his way can still be successful.

France won the 2018 World Cup with their tried and trusted 4-3-3 system. The formation got the best out of Paul Pogba in midfield — something his club Manchester United have struggled to do — while offering width in attack.

To provide more defensive solidity, Deschamps went with a 3-4-3 formation against Switzerland at the Euros, with midfielder Adrien Rabiot deployed in a wingback role. But after falling behind at halftime, the experiment was shelved and the formation changed back to the usual set-up.

Undeterred, Deschamps again deployed a 3-4-3 system in the Nations League final four tournament, but this time with more suitable players in wider roles.

After a slow start as Belgium raced into the lead, AC Milan full back Hernandez proved a lot more effective at left-wing back than Rabiot, scoring the winner late on to complete France’s turnaround.

With another defender used in the wide right midfield position in Benjamin Pavard, Deschamps had found the balance he was looking for defensively, and let his strikers do the rest against Spain in the final.

The recall of Karim Benzema to the international fold is also paying dividends, with the spirit in the camp unaffected by the manager's bold move to bring back the Real Madrid striker.

“We went behind in both our matches,” Deschamps said after the Spain victory. “Beyond the talent that we have in this team, there’s also their character and mentality.”

Defending their World Cup title is next on the agenda, and France will need to show character similar to that in their Nations League campaign to go all the way in Qatar.

How they will set up remains to be seen, but Deschamps proved he can still mix things up, to great success, if necessary.

His wheelchair was broken, so a bunch of former teammates got together and bought him a new one
Sport
1 week ago