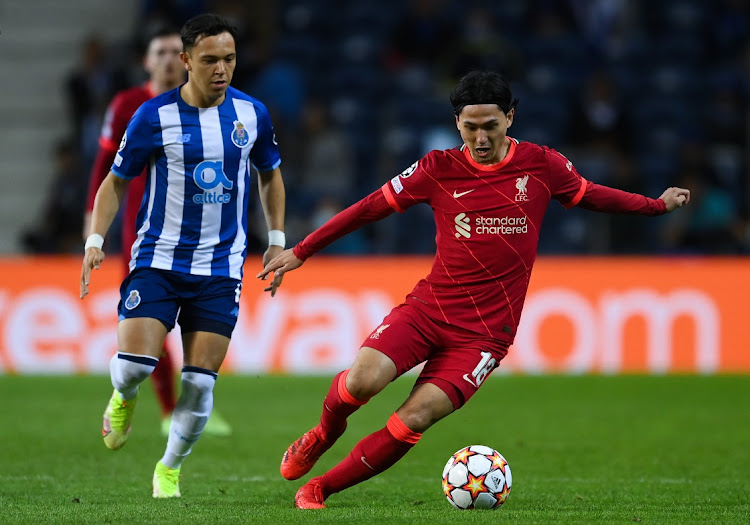 Takumi Minamino of Liverpool FC competes for the ball with Pepe of FC Porto during the UEFA Champions League group B match between FC Porto and Liverpool FC at Estadio do Dragao on September 28 2021 in Porto, Portugal. Picture: GETTY IMAGES/DAVID RAMOS

Porto — Maybe it’s something in the waters of the River Douro? But whatever it is, every time Liverpool set foot in the old city of Porto they cannot stop scoring goals.

They were at it again on Tuesday as Mohamed Salah and Roberto Firmino both struck twice and Sadio Mane once in a 5-1 drubbing of the Portuguese champions to seize control of Champions League Group B.

“I really don’t know the secret but maybe we should play our home games here,” Egyptian striker Salah said after Liverpool’s latest humbling of the two-time European champions.

“The most important thing in football is results and that’s a massive one away at Porto,” said Klopp, whose side top the group with six points, two ahead of Spanish champions Atletico Madrid.

“Winning in the way we won makes it even better. Performance-wise it was good in a lot of moments.”

Porto were hindered by an injury to central defender and skipper Pepe in the warm-up and looked at sixes and sevens against a ruthless Liverpool attack. They were not helped by goalkeeper Diogo Costa who was culpable for three of the goals.

Manager Sergio Conceicao said his side’s defending was not worthy of a Champions League match.

“The five goals we conceded are the kind you concede when you are in a relaxed training session and not when you’re playing in the Champions League,” he said. “Too many mistakes in danger areas … everything was bad, but the responsibility is mine.”

Klopp had some sympathy for Conceicao, who was robbed of his central defence linchpin before kickoff, having also been without the suspended Chancel Mbemba.

He said his side would have to find another level against City on Sunday. “It always helps, but against City it does not help alone, we need more things than only momentum,” Klopp said. “We need to play better than we did tonight, that is clear anyway. It will be a completely different game.”