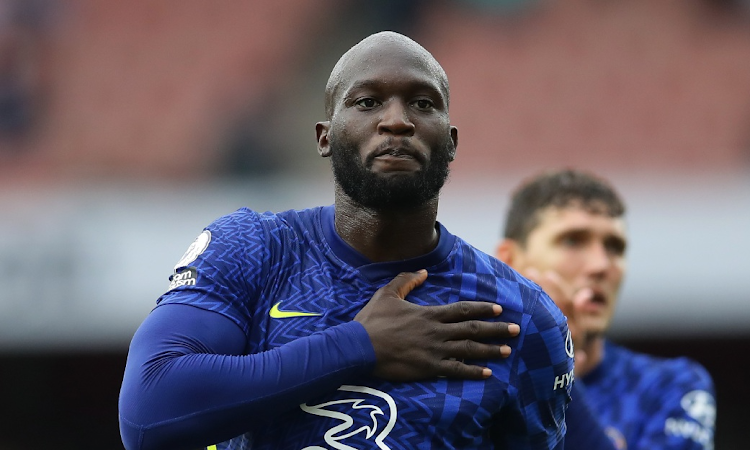 Chelsea's Romelu Lukaku celebrates after their match against Arsenal at Emirates Stadium in London, Britain, on August 22 2021. Picture: REUTERS/DAVID KLEIN

Dominant Lukaku fits right in: Chelsea fans left Arsenal’s Emirates Stadium chanting the name of Romelu Lukaku after the club’s record signing put in the sort of performance that has been largely missing from the Blues’ front line for several seasons.

Lukaku opened his account after 15 minutes on his return to the club’s colours and could have had more in the comfortable 2-0 win that showed how dangerous he is likely to be back at Stamford Bridge, seven years after he left the Londoners.

Asked to describe his performance, the 28-year-old told Sky Sports: “Dominant, I would say.”

It remains to be seen whether he is as dominant next weekend against Liverpool with a defence marshalled by fit-again Virgil Van Dijk and which has yet to concede a goal this season.

Kane makes return to warm welcome from fans: Harry Kane, who was reminded of the scoreline by fans when he missed Tottenham Hotspur’s 1-0 win over suitors Manchester City last weekend, got a warm welcome on Sunday as he came off the bench to make his first appearance of the season.

As Spurs edged to their second successive single-goal win this season with victory at Wolverhampton Wanderers, Kane, who has long been linked with a move to champions City, missed a great chance to score in the second half after coming on.

Fans greeted his appearance by declaring him “One of our own”, having celebrated their opening day success against City by asking: Are you watching Harry Kane?”

“I was pleased with the attitude of the fans,” coach Nuno Espirito Santo said after the win at his old club. “We have to be together. He [Kane] did well, he helped the team.”

Grealish can learn from Sterling: The £100m man Jack Grealish opened his account for Manchester City with a scruffy goal in a 5-0 win over Norwich City and manager Pep Guardiola believes the playmaker can become a regular name on the scoresheet.

Grealish has a reputation as a goal creator rather than scorer, but Guardiola said the England midfielder can follow the same path as Raheem Sterling, who became prolific at City.

“If he gets the mentality to score goals like Raheem, yeah [he can score more],” the Spaniard said.

“When Raheem was here when I first arrived he didn’t have goals in his mind and we immediately changed his arrival [into the box]. He changed his mind and decided he was going to score. Jack has this mentality to score goals and win games as well.”

Klopp questions new rules despite Liverpool win: Despite seeing his side make it two wins from two, with another clean sheet, Liverpool coach Juergen Klopp was still not happy after a 2-0 home win over Burnley on Saturday.

In his post-match media conference, the German ranted at great length about the challenges Burnley players were getting away with, given referees have been encouraged to blow up for fewer fouls this season to let the game flow.

“You saw these challenges with [Burnley’s Ashley] Barnes and [Chris] Wood and [Liverpool’s] Virgil [van Dijk] and Joel [Matip],” Klopp said. “I’m not 100% if officials are going in the right direction with these decisions. It’s like we're going 10 to 15 years backwards.

“The message now is let the game flow, but nobody exactly knows what that means. This is the football we want to see but it’s just too dangerous.”

Benitez confident Everton will only get better: Everton were disappointed to miss out on their second straight win this season after a 2-2 draw with Leeds United but there were plenty of encouraging signs for Rafa Benitez, who is moulding a side that can push for European qualification.

The Merseyside club looked sharp when they attacked and had 17 attempts on goal with eight on target, despite enjoying only 30% of possession against Leeds at a raucous Elland Road.

“Marcelo Bielsa has been working with his team for three years,” Spaniard Benitez said of Leeds, who needed a Raphinha wonder goal towards the end to grab a point. “We’ve had six weeks, so I’m expecting us to improve.

“We were expecting the team to start well this season. This was always going to be a difficult game so I’m pleased with four points out of six.”

Lukaku needed only 15 minutes to get off the mark for the Blues after his reported £97.5m transfer from Inter
Sport
10 months ago