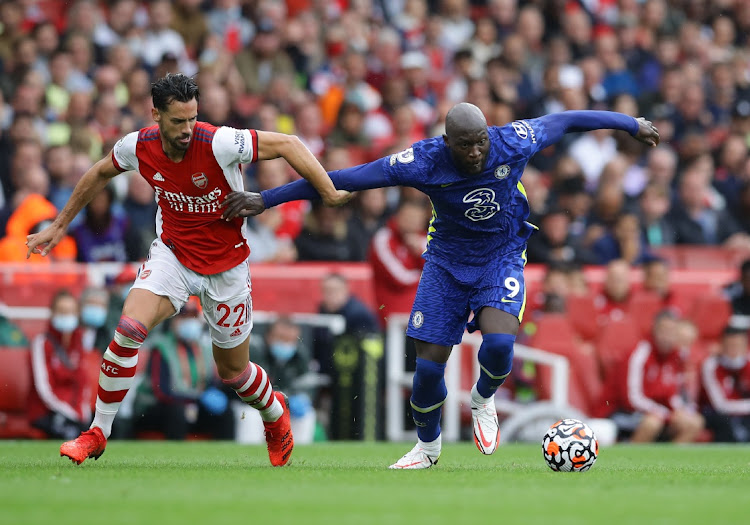 Arsenal’s Pablo Mari in action with Chelsea’s Romelu Lukaku during the Premier League match between Arsenal and Chelsea at the Emirates Stadium in London, Britain, August 22 2021. Picture: REUTERS/DAVID KLEIN

London — A goal by Romelu Lukaku on his second Chelsea debut and a strike by defender Reece James earned the Blues a 2-0 win at London rivals Arsenal on Sunday, their second victory in as many games at the start of the Premier League season.

Lukaku needed only 15 minutes to get off the mark for the Blues after his reported £97.5m transfer from Inter Milan, tapping in a cross played into his path by James.

The wing-back scored Chelsea’s second goal himself 20 minutes later, taking his time to fire past goalkeeper Bernd Leno after being found in acres of space by Mason Mount.

Lukaku, who never scored a league goal for the Blues in his first spell, showed why Chelsea were prepared to break their spending record to bring him back to the club seven years after he left London.

The Belgian provided the Blues with the kind of muscular presence in attack they have lacked since the departure of Diego Costa in 2017, both when running at Arsenal’s defence and holding the ball up with his back to goal.

Only a reflex save by Leno denied him a second goal when the German palmed Lukaku’s point-blank header onto the bar with 15 minutes to play.

Arsenal, lacking several key players through injury and illness, rarely threatened to disrupt Thomas Tuchel’s well-drilled side, who kept another of their trademark clean sheets.

Harry Kane came off the bench to make his first Tottenham Hotspur appearance of the season as Dele Alli’s penalty earned coach Nuno Espirito Santo a 1-0 win on his return to his former club Wolves.

Kane, who has been linked with a move to champions Manchester City, came on in the second half and missed a great chance to immediately get on the scoresheet.

Alli’s ninth-minute penalty, his first league goal since March 2020, was enough for Spurs to earn the win, however, as Nuno’s first trip back to the club he brought up to the Premier League during a four-year spell between 2017 and 2021 ended successfully.

The result means Spurs have won two from two so far this season, both by a 1-0 scoreline.

"We had to fight and earn the three points," Alli said.

"We have to put in a solid performance away from home and hit them on the counter. We knew they’d have chances, it’s how you deal with that.

"My game has been a little deeper this season, allows me to get in the box later, which is what I like to do. I’m happy to get the goal and help the team."

A second-half strike from Manchester United forward Mason Greenwood cancelled out an own goal by teammate Fred in a 1-1 draw at Southampton. United had a euphoric start to the season with a 5-1 home win over Leeds United but could not repeat that performance and were lucky not to lose to Ralph Hasenhuettl’s organised and dynamic side.

Southampton took the lead on the half-hour mark after a bright spell when Jack Stephens dispossessed Bruno Fernandes in the United half and the hosts swiftly moved the ball towards Che Adams, whose shot took a heavy deflection off Fred to squirm inside the near post and past David de Gea.

United defender Harry Maguire hit the crossbar early on with a looping header, while Anthony Martial’s rebound was scrambled off the line by Mohammed Salisu. But the half belonged to Southampton, who swarmed over United with an aggressive high press and caused havoc down the right-hand side.

Ole Gunnar Solskjaer’s side levelled early in the 55th when Greenwood thumped a low shot under Alex McCarthy after clever interplay between Fernandes and Paul Pogba.