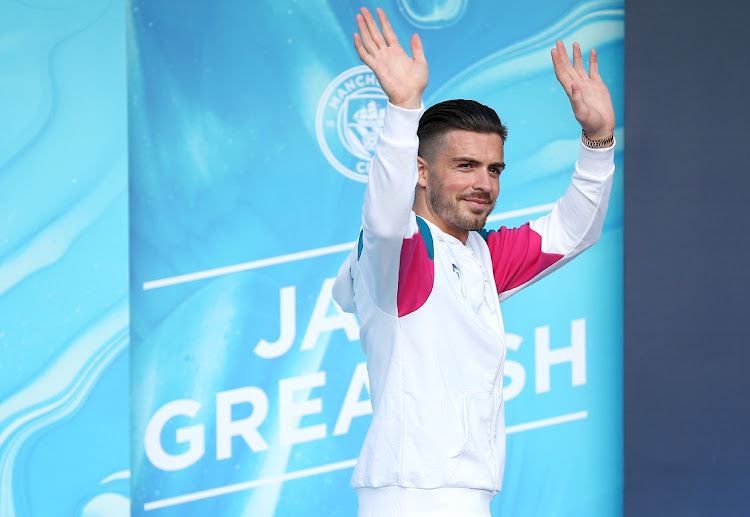 Jack Grealish of Manchester City waves to fans before leaving as he unveiled to fans at Etihad Stadium on August 9 2021 in Manchester, England. Picture: GETTY IMAGES/CHARLOTTE TATTERSALL

Manchester — Manchester City showed that anything their rivals could do in the transfer market, they could go one better, and the British-record signing of Jack Grealish has put them in a strong position to remain one step ahead this season.

The best never rest on their laurels and are always looking to improve.

City’s great rivals Manchester United dominated during the 1990s and into the 2000s, with coach Alex Ferguson famous for looking at how to tackle the next campaign soon after winning a Premier League title. Time after time, even if his team won the league at a canter, United would look to make big-money acquisitions to improve the team.

Juan Sebastian Veron — then a British record signing — Dimitar Berbatov and Ruud van Nistelrooy all arrived for huge fees to join United teams that had won the title the previous season.

City coach Pep Guardiola is no different in his unrelenting desire to add more trophies to his growing collection.

Despite having one of the most exciting young forward players in Phil Foden at his disposal, the Premier League assist king, Kevin De Bruyne, England’s standout star of Euro 2020, Raheem Sterling, and a host of other attacking options, Guardiola has turned to Grealish to give him further firepower.

The new arrival is not short of confidence either.

“I can’t wait to play with these players,” Grealish said at a news conference this week. “Sometimes at [Aston] Villa I would get doubled up on. Here, because there’s so much talent all over the pitch, that might make it harder for teams to double up on me which will give me more space to attack players one-versus-one.

“You need to find that chemistry, but after a few weeks I’ll have that and will look forward to it.”

The £100m signing from Villa is the first British-record capture to break the nine-figure barrier — a real statement of intent ahead of Guardiola’s sixth season in England.

The Spaniard has never stayed as manager at any club for anything like as long, with the lack of a Champions League crown for City meaning he has unfinished business.

Yet for Guardiola, any quest for continental success is based on an unwavering approach to domestic dominance, and defending City’s fifth Premier League title in a decade will be of paramount importance.

There are question marks over whether City’s spending will stop with Grealish’s arrival. One player in particular would fill the hole left by the club’s top goalscorer Sergio Aguero, who departed for Barcelona at the end of last season.

“Harry Kane is an exceptional, extraordinary striker, of course we are interested — but he is a Tottenham [Hotspur] player,” Guardiola said at a news conference last week. “If they don’t want to negotiate, there is nothing more to say. If they want to, we will try.”

Should Tottenham reluctantly sell England captain Kane to City, their team would seem on paper to be unstoppably strong, such would be the myriad of attacking options for Guardiola. But even without Kane, City, who are well-versed in Guardiola's favoured false-nine approach where their fluid forward line operates without a main striker, would be the team to beat this season.

PSG supporters say they are ‘waiting for a legend’, though it is not certain the star will join the club
Sport
9 months ago
Next Article