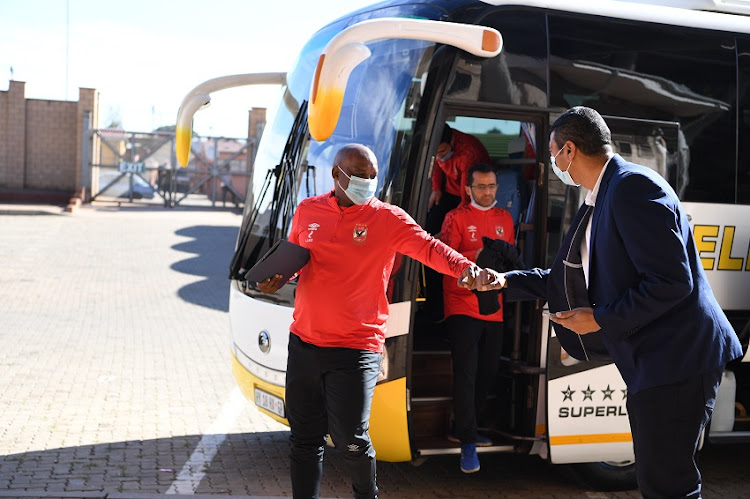 Al Ahly coach Pitso Mosimane has confirmed that he would like to be reunited with Percy Tau and bring his England-based protégé to the reigning Caf Champions League champions in Cairo.

Tau’s future remains uncertain at English Premiership side Brighton and Hove Albion‚ where he made only three appearances last season‚ and it is not known whether he will be given an opportunity to stake a claim in the starting line-up in the next season.

Speculations on Tau’s imminent move to Al Ahly intensified further when he was left out of the Brighton side that lost 2-0 to La Liga outfit Getafe at the Amex in a friendly on Sunday.

“I would like for Percy to come here. Any coach would want [him] to come to Africa‚” Mosimane said.

“Let him come to play in the Club World Cup against Bayern Munich and dribble Bayern. Percy is a showman‚ he is like Lionel Messi‚ he’s got so much to show you every day and week at training…. Let’s give him a chance to show what he can do.”

Bringing the 27-year-old to Egypt would be one of the biggest coups in continental football‚ but the coach admitted that Brighton must be willing to sell and Al Ahly must be able to afford him as he will not come cheap.

“Yes‚ I would like to sign Percy if Brighton agree to sell him. But first we must be able to pay him and if we can pay him‚ he must come and show that he is the king of the jungle.”

Tau needs to be playing regularly as he is almost 28 years old, Mosimane said. “Percy has been in Europe for about four years and… we haven’t seen him play. We saw him play football in Belgium but SA teams can [compete] against those Belgium teams.

“At Al Ahly we can compete and we can go toe-to-toe with Bayern Munich‚ who took 75 minutes before they scored a goal against us‚ and that means we are a credible team. If Al Ahly can be the third-biggest team in the world and beat a South American team that represented the whole of South America [at the Club World Cup] ‚ it means Al Ahly is a good team.

“Percy hasn’t played football and he is approaching 28 years now. Do you want him to retire without having played football? He has the tag that he is in the EPL [English Premier League]‚ but he is not playing in the EPL‚ and they keep on loaning him out.

“They have preseason now and they are paying friendly games‚ but they don’t even start with him…. Percy has to decide whether he wants to retire without playing football because for me the last time he played football was at Mamelodi Sundowns and I was with him.

“But first he must look at the finances. If he can get what he gets in England at Al Ahly and he can be the king of the jungle with us‚ and he is happy to play football‚ he can show people what he is capable of here at Al Ahly.”

Is Percy Tau’s move to Al Ahly a good one?

PSG supporters say they are ‘waiting for a legend’, though it is not certain the star will join the club
Sport
9 months ago