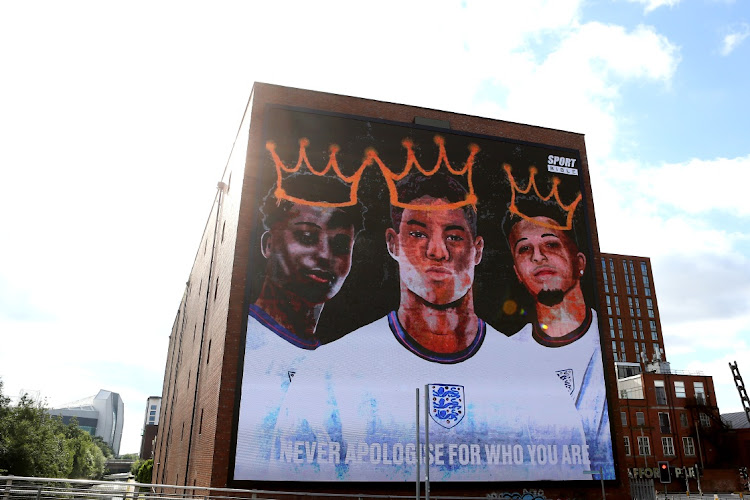 A Giant mural in support of the three England footballers Marcus Rashford, Jadon Sancho and Bukayo Saka has been unveiled in Manchester. Picture: CHARLOTTE TATTERSALL/GETTY IMAGES

A specialist team is looking into the offensive comments, police said, after three black players — Marcus Rashford, Jadon Sancho and Bukayo Saka — were targeted with racist abuse on social media sites Facebook, Instagram and Twitter. All three missed penalties in the penalty shoot-out defeat against Italy at Wembley Stadium in London.

The abuse has been widely condemned and the government has promised action against social media companies if they do not remove offensive material more quickly.

“We are working very closely with social media platforms, who are providing data we need to progress inquiries,” said Chief Constable Mark Roberts, the officer responsible for leading Britain’s policing response on football issues. “If we identify that you are behind this crime, we will track you down and you will face the serious consequences of your shameful actions.”

A hate crime investigation led by the UK Football Policing Unit is under way.

Police said that dozens of data applications had been submitted to tech firms and that four people had been arrested so far.

The England players had highlighted the issue of racism by taking the knee before their matches, a protest that fans booed.

British Prime Minister Boris Johnson has promised to tackle online abuse, but he and other ministers have been accused of hypocrisy for not condemning those who booed the players at the start of the tournament.

Police also said there had been 897 football-related incidents and 264 arrests in the 24 hours around the final, a big increase on previous soccer tournaments in 2016 and 2018.

At Wembley, fans were unruly and large groups without tickets stormed security cordons.

British Formula One driver was mugged and his watch, worth £40,000, was taken outside Wembley Stadium
Sport
2 weeks ago