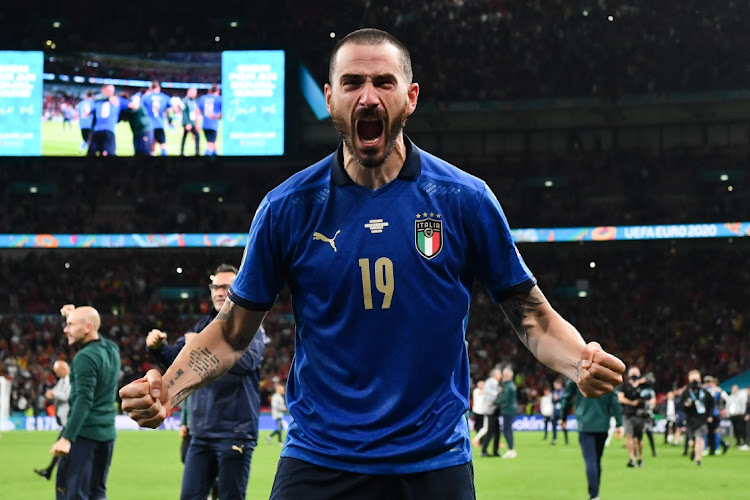 Leonardo Bonucci of Italy celebrates after the team’s victory in the Euro 2020 Championship semifinal match between Italy and Spain, at Wembley Stadium in London, England, on July 6 2021. Picture: JUSTIN TALLIS/GETTY IMAGES

Rome — When the elated, exhausted Italians stepped up to face the cameras after their exhilarating Euro 2020 semifinal penalty shoot-out win over Spain, the same word kept coming up.

“We all suffered together, now we are one centimetre away from becoming legends,” said Leonardo Bonucci.

Man of the match Federico Chiesa said “we suffered as a team”, while manager Roberto Mancini pointed out: “There are games where you have to suffer. They can’t all be as smooth as our progress so far.”

The theme continued into the following day’s newspapers. La Repubblica’s headline read: “Italy, how much suffering — now the dream is close”.

Gazzetta dello Sport columnist and former Leicester City manager Claudio Ranieri wrote: “What suffering, yet again, but this is international football at the top level. A magnificent spectacle, sport is also sweat, fatigue, struggle and tears.”

None of this was intended in a negative sense. On the contrary, Italy’s ability to get over the line in by far their biggest challenge of the Euros so far has made many people on the peninsula more convinced than ever of their ability to go on and win it on Sunday.

Italy have won all six of their games at the tournament, and in different ways. They dominated their three group games against Turkey, Switzerland and Wales, scoring seven goals and conceding none.

Against Austria in the last 16, they toiled to an extra-time win against a physical side they were expected to beat, lacking their usual verve and dynamism but showing impressive resilience.

A blistering first half of attacking football blew away the Belgians in the quarterfinal, with the two goals Italy scored before halftime proving to be enough to win the game after a nervy second half.

But against Spain, it was a completely different task.

Italy’s midfield has impressed so far in the tournament and the battle in the centre of the park was eagerly anticipated, but it proved to be no contest as Luis Enrique’s side, led by the mesmerising 18-year-old Pedri, dominated 65% of possession.

But the Italians soaked up the pressure and then showed composure when it was needed most in the shoot-out.

The Azzurri have taken knocks along the way in this tournament, losing Alessandro Florenzi to injury midway through their opening game, captain Giorgio Chiellini in their second, and in-form full back Leonardo Spinazzola against Belgium.

But the way the collective has stepped up to surpass a series of hurdles coming in different shapes and sizes has impressed.

There has been no single standout performer, demonstrated too by the fact that Mancini’s side has five different players on two goals, becoming just the second team in Euros history to have as many after France in 2000.

They have entertained and dazzled at times, but their ability to suffer, and their experience of doing so, could prove to be this team’s most important attribute in Sunday’s final.