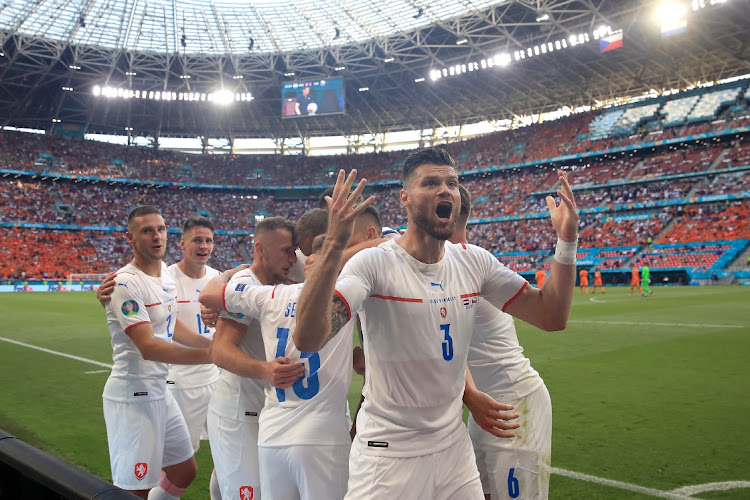 Budapest — The Netherlands exited the European Championship on Sunday in a reminder that while they were making progress after years in the doldrums, they are still well off being one of the continent’s top teams.

They were eliminated in a 2-0 loss to the Czech Republic in the last 16 in Budapest which hinged on the second-half dismissal of centreback Matthijs de Ligt, in stark contrast to previous tournaments where they have been genuine contenders.

But while the calamity of the red card had a bearing, it was overall a disappointingly limp performance from the Dutch in the searing heat on Sunday.

Only flying fullback Denzel Dumfries — their player of the tournament — upheld his growing reputation but their other stars of the previous three Euro 2020 matches failed to shine when needed most.

Striker Memphis Depay had a distinctly off day and captain Georgino Wijnaldum found himself hurried and pressed in midfield.

For coach Frank de Boer it set off another round of recriminations from pundits questioning his choices, his substitutions and his future at the helm of the team.

He had already pricked their ire before the start of the tournament with his decision to move away from the traditional “Holland school” of an attacking 4-3-3 formation and rather employ two wingbacks in a 5-3-2 formation.

In a country more obsessed than most with the way their national team plays, it provoked a fiery debate and loud outcry, as it had when predecessor Louis van Gaal first dared tinker with Dutch tradition at the 2014 World Cup.

“I too thought that 4-3-3 was the best way to form triangles all over the field, but I did see the advantages of this other system. Today I think 5-3-2 is the best system. You can attack, defend, put pressure anywhere, and if you play well, take less risk,” said Van Gaal in one of the few supporting arguments that De Boer received over the past weeks.

Just as Van Gaal had quelled the fury as the Dutch reached the semifinals in Brazil, so De Boer muted the debate as the Dutch won their three group games, beating Ukraine, Austria and North Macedonia with all the matches hosted in Amsterdam.

They looked to be making strides after having missed out on the last two big tournaments — the last Euros in France in 2016 and the World Cup in Russia three years ago. But it proved a mirage for success-hungry Dutch supporters, whose side had been in a World Cup final just over a decade ago and whose expectations had been ratcheted up again.

Instead, De Boer will now have to weather a renewed storm of criticism and continued questions over his competence as he ponders whether it is worth seeing if he can qualify the side for next year's World Cup in Qatar.

Meanwhile, for the world’s top-rated side, Belgium, goal hero Thorgen Hazard came out from under the shadow of brother Eden with the winner against Portugal in Seville on Sunday, ensuring his team a place in the European Championship quarterfinals.

The Bundesliga-based winger took aim from outside the penalty area with a rasping shot, that swung left and then right through the air, before crashing into the net to ensure Belgium’s progress from the last 16 and the elimination of the title holders.

The first to congratulate him was elder brother Eden, the Belgian skipper, whose exploits contrasted with that of his younger sibling when he had to leave the pitch before the end of the game with a suspected muscle tear.

“I think we have to wait and see what happens with Eden,” said Thorgen, whose goal was the only one of the game. “Judging by the number of messages I’ve had on my mobile, I do think it’s the most important goal of my career,” said Hazard.

It was the second of the tournament for Hazard, who now has eight goals for Belgium in 38 international appearances. “It was not easy against the European champion. It was hard in the second half, but we defended well and we qualified, that’s the most important thing.”

“It was a complicated game. Both teams were waiting for the other's mistake. We defended very well, we were a little lucky too, we have to admit it, and Thibaut Courtois made some key saves when needed,” he said of his goalkeeping colleague.

“We are very happy with this qualification. We are going to rest before thinking about the next step.” Belgium next face Italy in Munich on Friday.

Manchester United forward says all players have ‘a massive role to play’, even those not in the starting 11, if the team wants to win the tournament
Sport
4 months ago
Next Article