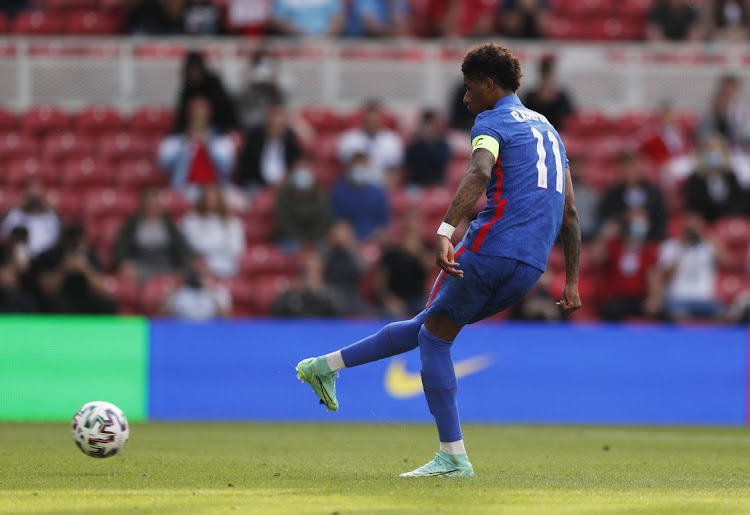 Bengaluru — England’s Marcus Rashford says every player in Gareth Southgate’s squad has a role to play at the European Championship and he is more concerned about delivering the title for England than seeing his name in the starting line-up.

The Manchester United forward captained England and scored in last weekend’s 1-0 friendly win over Romania but he struggled for fitness and form at the end of last season for United, scoring once in their final 10 games.

The 23-year-old faces tough competition for a place in the starting line-up for Sunday’s Group D opener against Croatia, with Southgate blessed with plenty of attacking options in his 26-man squad.

“We go there as a squad that’s trying to win a tournament,” Rashford told British media. “Whether or not you’re starting in the first 11, you’ve still got a massive role to play if we want to win the tournament.

“Don’t get me wrong, everybody wants to be in the first 11 but I think from my experience of being in tournaments you need a squad, you have to have players capable of coming on at different moments and giving that extra spark.

“I think in our squad we have that all over the pitch, so to be honest, it [starting against Croatia] is not at the front of my mind.”

England, semi-finalists at the 2018 World Cup, face Scotland on June 18 and the Czech Republic four days later after playing Croatia, with all games being held at Wembley.

• Wales midfielder Aaron Ramsey says his fitness concerns are behind him and he is confident he can cope with the demands of the European Championship.

Ramsey has been plagued by injuries in recent years, which limited his game time for club and country, but the 30-year-old played 22 of Juventus’s 38 Serie A games last season.

“For me to have missed a few games over the last few years has been very frustrating and difficult,” the former Arsenal midfielder said. “Hopefully now that is behind me and I can look forward to all these games in the European Championship.

“I’ve definitely worked hard over the last few months to get my body back into a good place.”

Wales, who reached the semifinals in 2016, play three Group A games in nine days, starting with Switzerland on June 12 at Baku. They also face Italy and Turkey.

“It’s a very difficult group,” Ramsey said. “Our target is to get out of the group so we’re going to have to be fully focused, hit the ground running.”

• Midfielder Donny van de Beek has had to pull out of the Netherlands squad for the European Championship because of injury, the Dutch football association KNVB said on Tuesday.

No details were given about the injury but the KNVB said examinations had concluded he would not be fit in time to play in the tournament, which kicks off at the weekend.

The Netherlands meet Ukraine in their opening Group C match in Amsterdam on Sunday. The 24-year-old Van de Beek, who has 19 caps, trained separately from the rest of the squad on Monday, along with Matthijs de Ligt. The defender has a groin injury and sat out Sunday’s friendly win over Georgia in the last warm-up for the Dutch.

The KNVB said coach Frank de Boer would not be calling up a replacement for Van de Beek, even though the Dutch are entitled to replace him before their first game.

• Chelsea goalkeeper Kepa Arrizabalaga has been added to Spain’s training squad as they prepare for any potential fallout from captain Sergio Busquets’s positive Covid-19 test.

After Busquets tested positive, the remaining 23 players went into isolation along with the coaching staff.

Arrizabalaga and the five others will train in what Spain are calling a “parallel bubble” away from the main Euros squad with a view to them being added should the need occur.

The Spanish FA also confirmed on Monday that all the players and staff who are currently isolating tested negative but will continue to train alone ahead of next Monday’s Group E opener against Sweden in Seville.