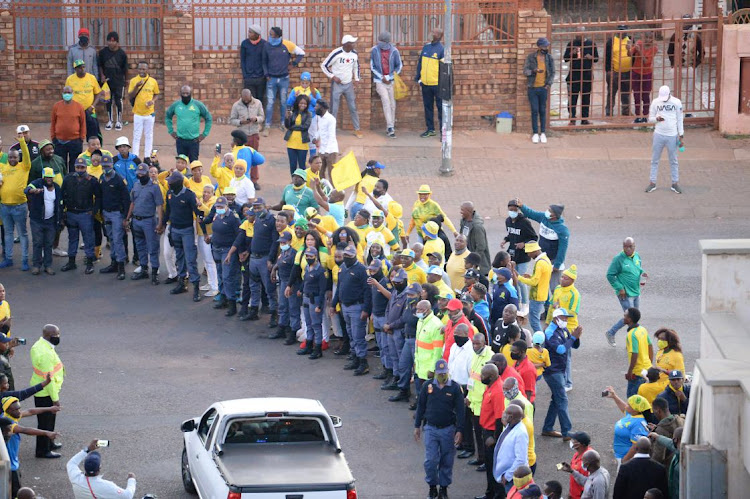 Mamelodi Sundowns will begin dialogue with Egypt’s Al Ahly in a bid to ease the tension after a section of the Pretoria club’s supporters hurled insults at former coach Pitso Mosimane as his team bus was making its way into Lucas Moripe Stadium on Saturday.

The Brazilians hosted Al Ahly in a Caf Champions League second leg quarterfinal on Saturday and the atmosphere was inflamed when supporters clad in Sundowns colours tried to block the visitors’ bus outside the stadium.

The incensed supporters hurled insults at their former coach and brandished placards with similar profanities‚ to the dismay of the visitors and Mosimane.

Sundowns faced considerable pressure from observers and the nation’s soccer lovers for failing to condemn their supporters’ actions immediately after the scenes.

The club eventually apologised to the Egyptians on Sunday and said an investigation would be carried out in a bid to bring the perpetrators to book.

“Mamelodi Sundowns observed behaviour and conduct from some of its supporters before its match with Al Ahly which is unacceptable and improper and does not reflect the integrity‚ respect‚ compassion and other values that we uphold‚” the club said on Sunday.

“We received complaints by supporters of improper conduct and insults‚ but Mamelodi Sundowns supporters should under no circumstances disrespect‚ insult or behave in the manner they did and must at all times stay true to our values and principles.

“We therefore want to apologise to Al Ahly and those associated with the club. Mamelodi Sundowns will institute an investigation and appropriate action will be taken against those supporters whose conduct was improper and contrary to the values and principles that we adhere to.”

Caf head of operations Luxolo September said he was in Cameroon inspecting facilities ahead of 2022’s Africa Cup of Nations and would not be able to comment on the matter.