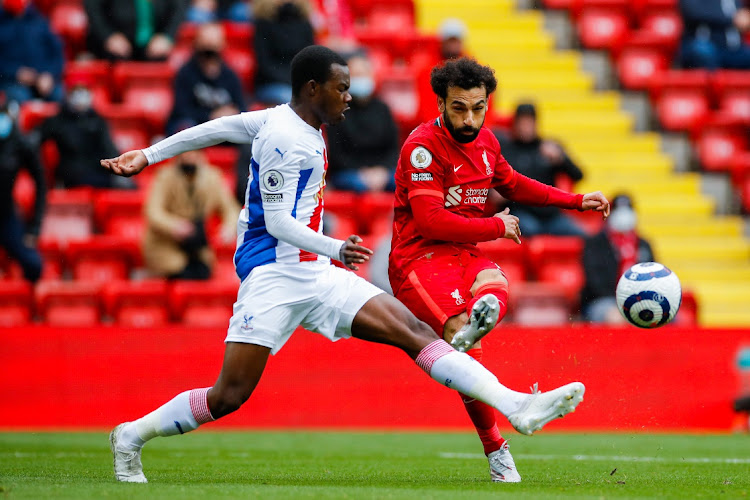 Mohamed Salah of Liverpool shoots during the Premier League match between Liverpool and Crystal Palace at Anfield in Liverpool, England, May 23 2021. Picture: PHIL NOBLE/GETTY IMAGES

A fifth straight win completed an impressive end to what had been a disappointing and injury-plagued Premier League campaign for last season’s champions.

With 10,000 home fans present, Liverpool made a nervy start and Palace’s Andros Townsend missed a great chance when he intercepted a poor pass from Trent Alexander-Arnold, but with only Alisson Becker to beat, he fired wide of the post.

Liverpool grew into the game though, creating several chances before Mane broke the deadlock in the 36th minute, firing home from close range after Palace were unable to clear an Andy Robertson corner.

Mane made sure of the win and a top-four spot when he drilled in a left-footed shot in the 74th minute after being set up by Mohamed Salah.

Liverpool ended the season unbeaten in their final 10 matches, winning eight of them. They finished in third place on 69 points, 17 points behind champions Manchester City.

The game was the final match in charge of Palace for their manager Roy Hodgson, who is leaving the role at the age of 73.

Leicester City twice squandered the lead to lose 4-2 at home to Tottenham Hotspur on Sunday as their Champions League dream was shattered on the final day for the second successive season.

Jamie Vardy converted two penalties to give Leicester 1-0 and 2-1 leads and, with Chelsea losing at Aston Villa, that would have been enough for Leicester to claim fourth spot.

But a 76th-minute own goal by goalkeeper Kasper Schmeichel gifted Spurs an equaliser and Gareth Bale, possibly in his last game for Tottenham on loan, rubbed salt into Leicester’s wounds with two well-taken late goals.

Just like last term when a Champions League qualifying spot looked to be theirs for the taking, this season’s FA Cup winners Leicester finished in fifth place and will have to content themselves with a Europa League campaign.

Victory left Tottenham in seventh and they will enter the inaugural Europa Conference League.

Chelsea, Liverpool and Leicester City are fighting it out for the last two spots in the top four and a place in the Champions League
Sport
4 months ago

KEVIN MCCALLUM: Woofs aside, a hit of pure, uncut Liverpool