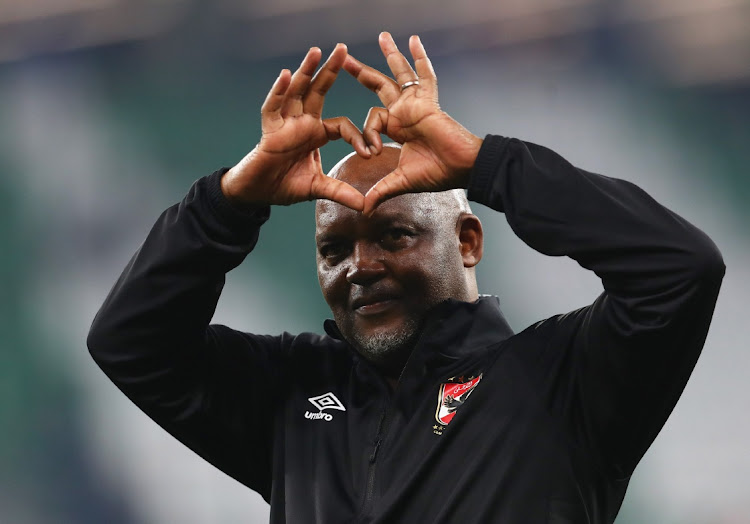 Mamelodi Sundowns will be backed up by their superb home record in the Champions League when they take on Al Ahly in the second-leg quarterfinal at Lucas Moripe Stadium in Atteridgeville on Saturday.

The Brazilians‚ trailing the Red Devils 2-0 from the first leg in Cairo last weekend‚ have proved to be difficult to beat at home in this competition in the past four years, having lost only once in 21 matches.

Incidentally‚ Al Ahly coach Pitso Mosimane was at the helm of Sundowns when they went 20 matches unbeaten and now has a chance to succeed where his predecessors failed by beating the Brazilians in Pretoria.

Sundowns co-coaches Manqoba Mngqithi‚ Steve Komphela and Rhulani Mokwena were in charge during the loss to Algerian side CR Belouizdad in April at Loftus‚ the Brazilians’ first defeat after 28 matches in all competitions this season.

Before they were beaten by CR Belouizdad‚ Sundowns’ last defeat in the Champions League was to Esperance of Tunisia in 2017.

One of Sundowns’ famous wins in the Champions League came in April 2019 when they thumped Al Ahly 5-0 in a match in which attacking midfielders Themba Zwane and Gaston Sirino dazzled.

Speaking on arrival in the country with Al Ahly on Tuesday‚ Mosimane said the second leg gives him mixed feelings.

“It’s mixed emotions but at least we broke the ice in the first match in Cairo‚” he said‚ adding that they had to arrive in the early hours of the morning because of the curfew.

“We couldn’t land any other time because of the regulations and the curfew — we had to land in the morning. Our 2-0 win in Cairo is a slight advantage in the game‚ but it’s like halftime. It doesn’t mean anything. How many times has a team been 2-0 down at halftime and come back in the second half to win the match 3-2?

“It’s a little advantage for us because it gives us confidence and puts a little pressure on the opposition‚ but we will see how it goes.

“Al Ahly have been to Lucas Moripe on a number of occasions in the past and Sundowns used to take their Champions League matches there even during my time. It will not be the first time Al Ahly are playing there; it’s OK as long as the pitch is OK.”

MNINAWA NTLOKO: Benni is not ready for the job, so let’s not gamble with his future