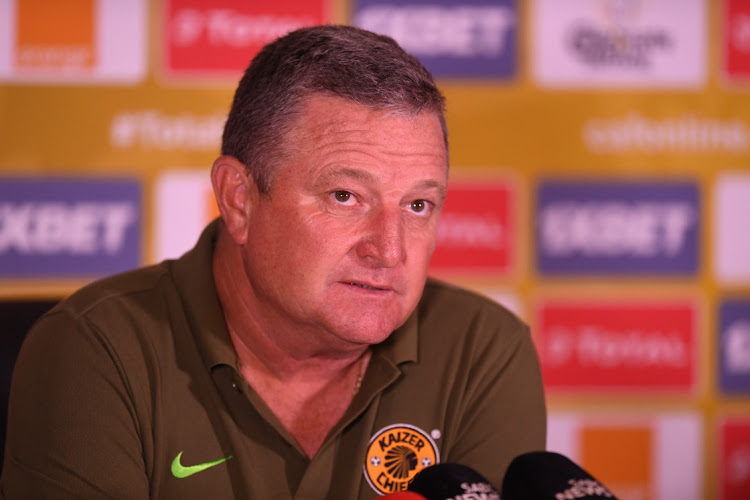 Kaizer Chiefs need at least 17 points in their last 10 games to meet the minimum requirement of a top-eight finish in the Premier Soccer League (PSL)‚ coach Gavin Hunt said after his team’s Caf Champions League heroics in Guinea at the weekend.

Chiefs pulled off their biggest success of a difficult season, reaching the Champions League quarterfinals with a dramatic 2-2 draw against classy Horoya in Conakry on Saturday night. They now aim to use the momentum of that game to ensure a decent Premiership finish.

Hunt’s team are unbeaten in seven games in league and cup matches.

The coach would surely appreciate the highest placing possible in his maiden season at the club‚ but the minimum requirement will be to improve on their current ninth and reach the top eight‚ thus avoiding an emulation of Chiefs’ two worst PSL finishes.

That mission will start when Chiefs meet 12th-placed Baroka FC at Peter Mokaba Stadium on Thursday.

“We’ve got 23 points‚ we’re going to need another 17 points in the league to get ourselves into the top [half]‚ and that’s minimum‚” Hunt said. “Seventeen in 10 sounds doable‚ but it’s easier said than done.

“So you’ve got to adapt. And we’ve got a hell of a game with Baroka on Thursday. The travelling to the stadium [in Conakry] was an absolute disaster — two hours in a bus‚ through traffic and so on. We’ll regroup and go from there.”

Hunt explained the changes he made against Horoya and how these saw Chiefs reverse the physical West African outfit’s dominance of the first half to match them blow for blow in the second.

He said he hopes the substitutes who contributed — notably Dumisani Zuma and Lazarous Kambole — can continue to produce more‚ as a lack of depth off the bench for most of the season has resulted in some mediocre performances.

“I tried to go a bit narrow on the left, taking Happy Mashiane off‚ and we played ‘Mshini’ [Nkosingiphile Ngcobo] on the left. Obviously we needed Kambole to come in and we put Khama Billiat at No 9.

“And you know‚ Billiat’s a striker, not a wide player. But I haven’t had the opportunity to play him there because we’ve been struggling in the wide areas. So the movement at ‘9’ got much better. I dropped Lebogang Manyama down [into midfield] at the start of the first half and we got Kambole up [behind Billiat].

“Then once we went 2-1 down I brought Dumisani Zuma on [for Manyama] on the right to try to give us a bit of balance there‚ and had Kambole and Billiat up — so we played with two ‘9s’ and Mshini on the left.

“Then the longer the game went at 2-2 we had to just solidify‚ bringing Willard Katsande on to help Njabulo Blom,” Hunt said.

“I think Njabulo again was man of the match. He was outstanding. He’s getting better in every game and he’ll be one for the future. He’s got legs‚ he can play.

“We have to look at our bench now because we need people like the Zumas to come in and help us. And I mean he’s got so much ability, but he’s got to have the mental attitude. And he’s one‚ and everybody else‚ Kambole [too].”

The 2020/2021 Champions League quarterfinal draw is scheduled for April 30.