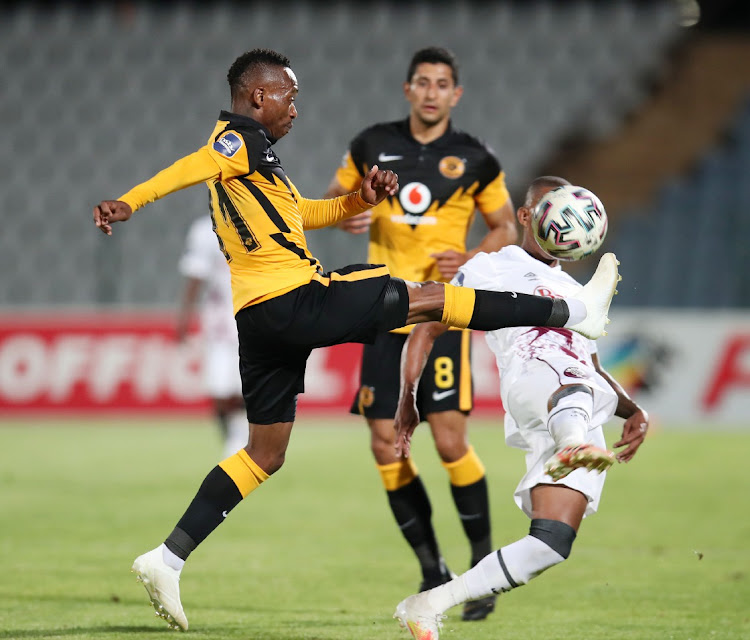 Khama Billiat of Kaizer Chiefs challenged by Vuyo Mere of Swallows during the DStv Premiership 2020/21 match between Swallows and Kaizer Chiefs at the Dobsonville Stadium, Soweto. Picture: MUZI NTOMBELA/BACKPAGEPIX

Kaizer Chiefs coach Gavin Hunt is delighted to have midfielder Khama Billiat and striker Leonardo Castro back in the team in time to face Guinea side Horoya AC in a crunch Confederation of African Football (Caf) Champions League match this weekend.

Amakhosi travel to Conakry for the last match of the group stages and a scoring draw could see the Naturena side qualify for the quarterfinals for the first time in their history.

Billiat and Castro missed the club’s last few matches due to injury and Hunt is expecting a lot from the duo when they face the experienced Horoya side‚ who will be difficult to beat at home.

Chiefs warmed up for the continental match with a frustrating 2-2 draw with Stellenbosch FC at FNB Stadium on Tuesday where they twice had to come back from a goal down.

“It is good to have Castro and Billiat back‚” Hunt said. “We played last week and in the derby [against Orlando Pirates] where we couldn’t make any changes. But now we have something and at least we can make changes in that position. They [Billiat and Castro] had 20-odd minutes on the field‚ so they have to be ready for Saturday.”

Goalkeeper Itumeleng Khune will continue between the sticks against Horoya after he came on for Daniel Akpeyi‚ who was red-carded in the hard-fought 1-0 win over Wydad Casablanca at FNB Stadium last weekend.

Looking back at the draw with Stellenbosch‚ Hunt was left frustrated after they dropped more important home points.

“We are very disappointed‚ I am disappointed. We were behind and managed to come back. We should have controlled the match a little better‚ defensively we have to be a bit better, and we allowed the ball to come into the box.

“The character was good and we tried to take it to three goals‚ but we should be better. I don’t think there was any danger until they scored‚ I thought we had two great penalty shouts which we didn’t get. In the first half it was Lebogang Manyama and in the second it was Willard Katsande‚ and then they scored from two bad errors. It is one of those things.

“They are very different with their structure and there is no team in the league that plays with that structure. They play to the strengths of what they have‚ what they have signed. They want the game to be open‚ which I knew was always going to be a problem with their pace and how they play.”

Phathutshedzo Nange‚ who previously worked with Hunt at Bidvest Wits and is heavily linked with a move to Chiefs next season‚ did not celebrate after he scored the second goal for Stellenbosch.

“I know how to answer that question of why he didn’t celebrate but I’m not going answer it. He is a good boy‚ we have come a long way and it is what it is.”