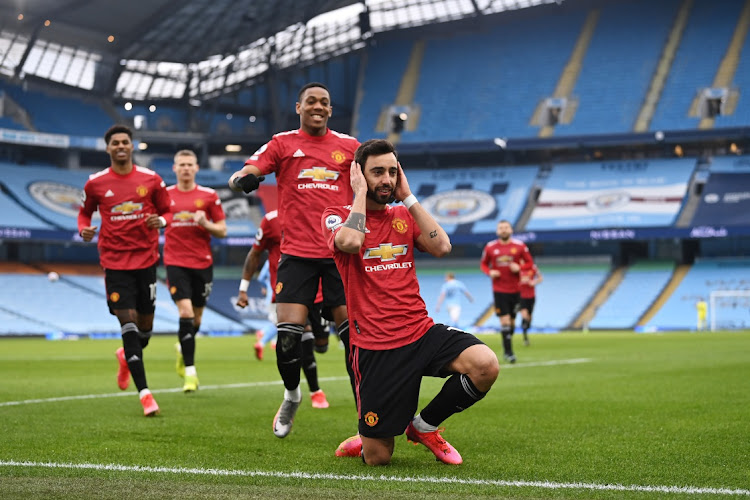 Bruno Fernandes of Manchester United celebrates after scoring their side's first goal from the penalty spot during the Premier League match against Manchester City at Etihad Stadium in Manchester, England, on March 7 2021 . Picture: GETTY IMAGES/LAURENCE GRIFFITHS

London — We take a look at Manchester United’s counterattacking tactics, which worked perfectly in the derby, and other talking points from the Premier League weekend.

What is wrong with counterattacking? You’ll struggle to find a pundit or analyst who has a bad word to say about Pep Guardiola’s tactical approach or, despite the recent slump, Juergen Klopp’s different style of football.

Guardiola is famed for his commitment to passing and possession, while Klopp is heralded for his high-energy pressing and demand that his team attack with pace. But when it comes to another style — counterattacking — it is not only the football hipsters who are unimpressed.

Somehow, that approach is seen as outdated, negative and not at all progressive. But as Manchester United showed in their 2-0 win at Manchester City on Sunday, defending effectively and as a unit and then launching speedy attacks when opponents are overcommitted, can be effective.

Goal flow slows as season takes its toll: After the season began with an incredible goal rush, it seems normal service has been restored. The first month of the Premier League season witnessed an unprecedented deluge with 144 goals scored in the opening 38 fixtures — an average of 3.79 per game.

Tottenham’s 4-1 hammering of Crystal Palace apart, this weekend was a low-scoring one and the average goals per game is now down at 2.61 compared to 2.72 for the 2019/2020 campaign.

It could be that the relentless fixture list is blunting attacks or perhaps as the season reaches its business end, tactics are becoming more cautious. Either way, the early-season goal feasts are a fading memory, with many attritional games now having armchair fans reaching for the TV off-button.

Liverpool’s faltering attack a threat to European ambitions: Another home game at Anfield, another defeat as Liverpool were undone by relegation-threatened Fulham on Sunday, but it is his attack, rather than the injury-ravaged defence, that is Klopp’s biggest headache.

Once again the Reds seemed to lack the guile to open up the opposing rearguard, either playing pointless crosses in from the wings or engaging in intricate passing movements on the edge of the box that all too often led nowhere.

If Klopp’s team are to make an impression in 2021’s Champions League or to qualify for next season’s edition, they’ll need their attack to start firing.

Diogo Jota has returned but what Klopp really needs is for Mohamed Salah and Sadio Mane to rediscover the form that made them one of the most feared duos in the English game — and lately there has been little to suggest they can do so.

Saints’ Tella gives Hasenhuttl hope after Ings injury: Southampton manager Ralph Hasenhuttl faces the prospect of losing Danny Ings for a few weeks after the striker limped off injured in Saturday’s 2-0 win at Sheffield United but he does not need to look too far for a player to inspire the team.

Soon after Ings was replaced by Che Adams, academy winger Nathan Tella sprang to life, even as his teammates looked a tad short of confidence, and won the penalty that James Ward-Prowse converted later in the half.

The 21-year-old looked dangerous throughout his 77 minutes on the pitch, frequently drawing fouls from the Blades centrebacks and could have added his name to the score sheet but for his finishing on the day.

Adams may have stolen the limelight with his rocket of a strike to seal the win but much of Hasenhuttl’s post-match praise was reserved for Tella.