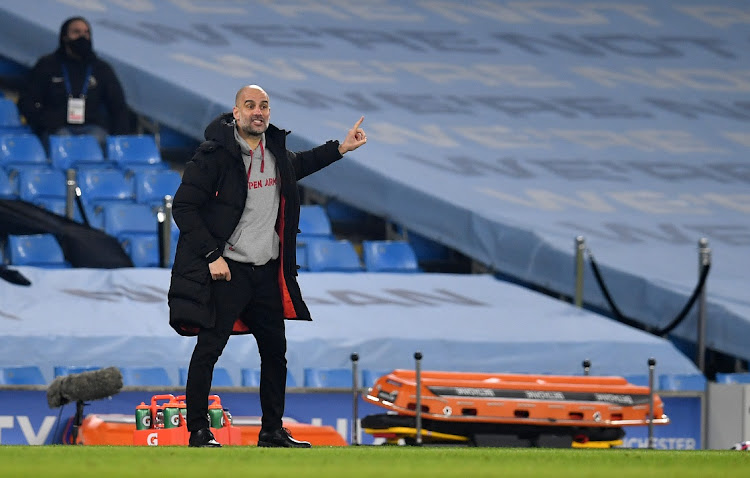 London — The Premier League title race is just about over but Manchester United at least have the opportunity to halt Manchester City’s assault on the European record books when the sides meet in Sunday’s derby at the Etihad Stadium.

City’s win over Wolverhampton Wanderers this week was their 21st in a row in all competitions and 15th in succession in the league and left them 14 points clear of second-placed United who could only draw 0-0 with Crystal Palace.

Pep Guardiola insists the priority is reclaiming the English title, but the Spaniard will also be aware that his side are in sight of surpassing some of the longest winning streaks in European football’s biggest leagues.

Victory over United would equal the 22 successive wins achieved by Carlo Ancelotti’s Real Madrid in 2014/2015. It would also put them just one win away from equalling Bayern Munich’s 23-game winning streak achieved last season and two behind Ajax Amsterdam who under Louis van Gaal embarked on a 25-match winning run in 1995.

The official top-level world record of 27 consecutive wins held by Welsh club New Saints is also looming into view, but on Sunday, at least, all that will become secondary.

While United are in danger of stalling after three successive 0-0 draws in all competitions, Ole Gunnar Solskjaer can boast a decent record in the derby, winning three of his last six encounters with City.

This season’s clash at Old Trafford ended 0-0 with United showing little ambition, a worrying trend whenever they have faced one of their immediate rivals this season. They have failed to win any of their seven games against the “big six” this season, scoring only once.

While United boast a proud away record this season, still unbeaten on their travels in the top flight, Solskjaer will be expected to send a side out showing more ambition on Sunday.

“It’s hard to explain. But I think that we have to do much better in these sorts of games, especially to create more opportunities, to risk more in their half, around their box,” United midfielder Nemanja Matic said after the dour draw against Crystal Palace on Wednesday.

Solskjaer says the clash with City will provide “extra spice” though how many risks he will be prepared to take against a rampant City on course to beat their own joint-record 18-match Premier League winning run, is questionable.

During their 15-match winning run in the league City have racked up 38 goals and conceded only five. Defeat for United would leave them vulnerable in the race to finish in the top four, a battle that could involve at least eight clubs chasing the three spots below runaway leaders City.

Third-placed Leicester City have faltered of late with injuries piling up, but they are still only a point behind United ahead of their game at Brighton on Saturday.

West Ham, who were fourth ahead of Thursday’s clash between fifth-placed Chelsea and sixth-placed Liverpool, suffered a 2-1 defeat by Manchester City last weekend, but will take great heart from pushing City all the way.

They host Leeds United on Monday when Chelsea are at home to Everton in another match that will have a big influence in the quest to secure Champions League football.

At the other end of the table 17th-placed Newcastle United face a nervy trip to 19th-placed West Bromwich Albion on Sunday evening, when defeat would leave the Magpies in grave danger.

With four goals in four games, the forward has hit his stride
Sport
1 month ago

Government to pledge £2.8m towards British and Irish bid, with prime minister calling for a bonanza of football
Sport
1 month ago
Next Article