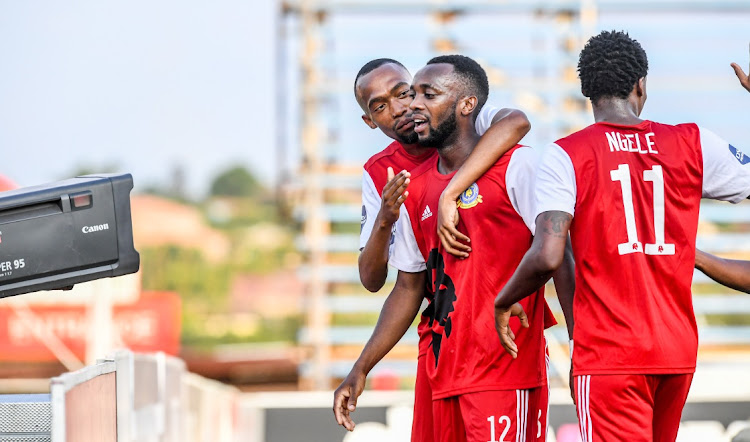 Justin Shonga of Tshakhuma celebrates with teammates after scoring the only goal during the DStv Premiership match between Tshakhuma FC and Baroka at Thohoyandou Stadium on November 22 2020 in Thohoyandou. Picture: GALLO IMAGES/SYDNEY SESHIBEDI

Cape Town City have strengthened their strike force with the signing of former Orlando Pirates and Tshakhuma Tsha Madzivhandila (TTM) striker Justin Shonga before their clash with Kaizer Chiefs in Cape Town on Saturday.

The Zambian international has spent less than six months in Limpopo with TTM after leaving the Buccaneers at the end of the 2019/2020 season.

He played seven matches and scored one goal for TTM but City‚ who have tied the striker to a three-year contract‚ are confident he will fill the boots of Kermit Erasmus who joined defending champions Mamelodi Sundowns in October.

“I would like just to appreciate the chair [John Comitis] of the club for taking into consideration signing me‚” said Shonga after arriving in Cape Town on Monday.

“Cape Town City is a good club and they’ve got good players and I’m so excited to join the club. I’m looking forward to fitting into the team. I’m hoping to have a good time and work hard with the team‚ win games and trophies.

“The club has a good reputation in terms of winning. I will work hard for the people of Cape Town and we’ll try to achieve more.”

The 24-year-old Shonga joined Pirates from Nkwazi FC in Zambia in 2016.

Shonga scored 17 goals in 77 appearances for the Buccaneers and had been linked with Egyptian giants Zamalek before City snapped him up.

City may field Shonga in Saturday’s game as the PSL window would have been opened on Friday for clubs wishing to register new players.

The Citizens‚ fourth on the Premiership table and eight points behind table-toppers Sundowns‚ have had attacking midfielder Mduduzi Mdantsane to thank for scoring seven of their 16 league goals this season after the departure of Erasmus.

The Birds have won six and drawn four of their games to claim second spot on the log, two points behind Sundowns
Sport
3 months ago