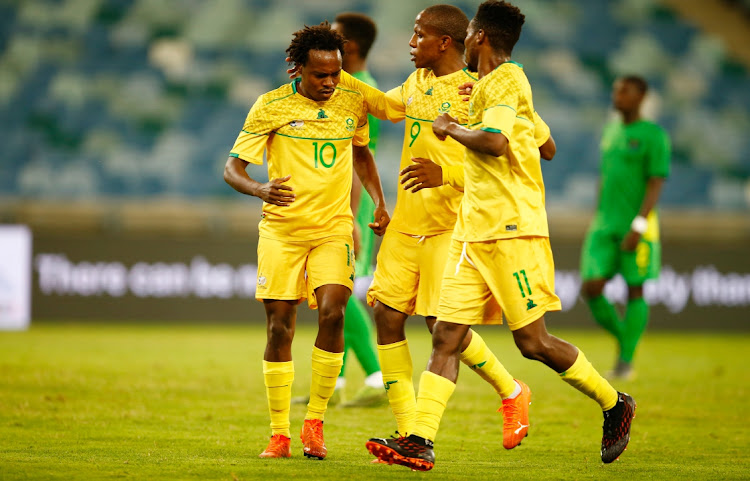 Bafana Bafana showed glimpses of the vision Molefi Ntseki has for the team in the second half of Friday’s 2-0 win against São Tomé and Príncipe‚ and the coach wants more of the same against the same opponents on Monday.

Bafana have a chance to complete the mission and take advantage of the situation presented by São Tomé ceding home advantage in their second Africa Cup of Nations (Afcon) qualifier against SA. Both matches are being played in SA to limit travel in the interests of safety due to the Covid-19 pandemic.

Should the South Africans earn another three points at Nelson Mandela Bay Stadium on Monday (kickoff 3pm)‚ they will have a foot in the next Afcon finals in Cameroon in January and February 2022.

After a poor first half at Moses Mabhida Stadium on Friday, Bafana upped their game in the second stanza, displaying fine movement on and off the ball that would have pleased Ntseki.

“It is important for us ... to understand the qualities of South African players‚” the coach said. “I keep on saying they are different from any other country‚ even Lesotho or Botswana or Zimbabwe close to us.

“We have got the skill‚ the flair and creativity. And if you profile our players properly you need to play the game that suits the players we have.

“Penetration and combinations really worked for us [in the second half], because the top four of Percy Tau‚ Lebo Manyama‚ Keagan Dolly and Themba Zwane started enjoying the game more in the second half.

“Because of the creativity that they have‚ which is natural with our players‚ everything started working well. Going into the next match we’ll build on what we were good at.

“Every South African is aware that six points will be important to us. Winning on Monday will give us a good opportunity to qualify for Afcon.”

Ntseki seems likely to stick with the core of the team that ended on top on Friday night‚ with perhaps Bongani Zungu — forceful coming off the bench and scoring — having earned a start in Port Elizabeth on Monday.

Ghana’s 2-0 win at home to Sudan keeps them top of Group C with nine points‚ with Bafana second on six‚ Sudan third on three‚ and São Tomé last on zero.