No secret to how Celtic stunned Sundowns 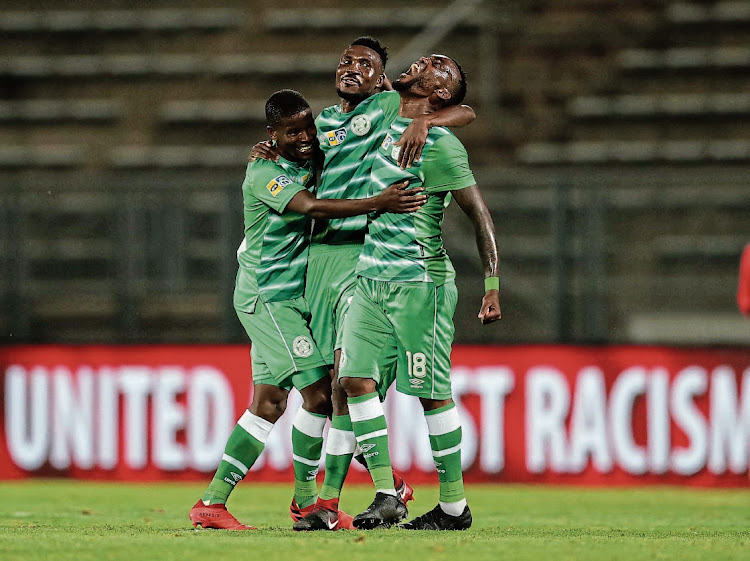 Neo Maeme, Lucky Baloyi and Given Mashikinya of Bloemfontein Celtic celebrates a victory during the 2020 MTN8 quarterfinal match against Mamelodi Sundowns at Lucas Moripe Stadium in Pretoria on October 18 2020. Picture: SAMUEL SHIVAMBU/BACKSTAGEPIX

What looked like an unexpected smash and grab from Bloemfontein Celtic when they knocked Mamelodi Sundowns out of the MTN8 on Sunday actually did not have a secret ingredient.

The John Maduka-coached team had a slice of fortune‚ but made it count when it mattered most.

Luck aside, Celtic were tactically disciplined against a star-studded but frustrated Sundowns who began life without talismanic former coach Pitso Mosimane.

Celtic‚ who have gone through recent financial upheaval‚ have proved that sometimes they only need their players to pull in the same direction for targets to be achieved.

Maduka‚ a former player at the club who replaced Lehlohonolo Seema as coach‚ said the well-conditioned players‚ who only took 10 days off at the end of last season‚ know what is expected of them and they are building an environment for them to thrive in.

“They understand what we want from them. It’s not like it’s the first time we’ve won with them. When coach Seema was still here‚ I was the co-coach with him‚ so they understand the way I work and what I expect from them.

“The relationship with the players is very good‚ they work very hard and they try to do things to the best of their abilities‚” Maduka said.

“After the bubble‚ we gave them 10 days off and that gave us three weeks to prepare the team. It’s also an abnormal season because of the way things were. It wasn’t more fitness but more tactical work as the players stayed well conditioned. We maintained that because we wanted to be able to play without any problems and tiredness.”

Well travelled goalkeeper Jackson Mabokgwane was at the heart of Celtic’s impressive performance. His saves and positioning were excellent. Lady Luck also smiled at him when Hlompho Kekana’s thunderbolt rocketed off the bar and did not cross the line.

With the impressive Sipho Chaine also at Celtic‚ Maduka has a selection headache. But it is one he feels is necessary because of the weird nature of the season.

“Those two goalkeepers compete in every training session‚ but if there’s something I can say‚ they’re on the same level. At any time‚ I can pick either keeper‚ so it’s always good to know that we can have both of them‚” Maduka said.

“At this moment‚ they’re both at the top of their game so it becomes very important to rotate them so that they don’t get rusty.

“If only one is playing and with so many games coming‚ we may have a problem. We need to make sure they are playing. Sipho has been playing well‚ but in this game we decided on Jackson.”