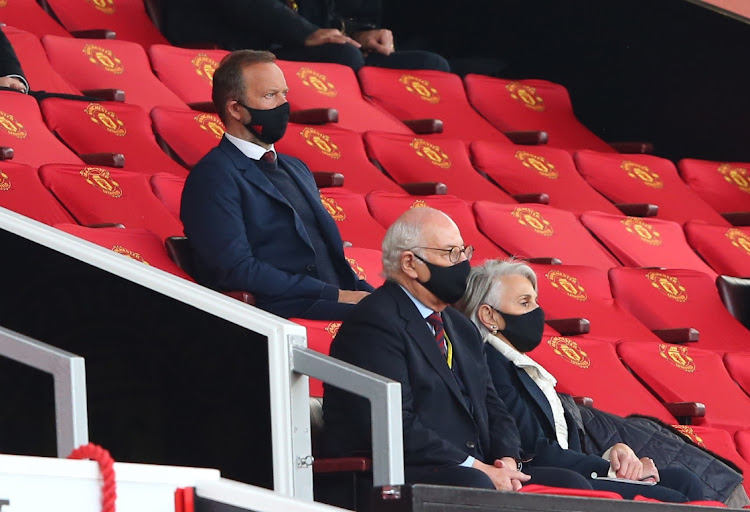 Manchester United executive vice chairman Ed Woodward, above, in the stands during the team's Premier League match against Tottenham Hotspur at Old Trafford in Manchester, Britain on October 4, 2020. Picture: Pool via REUTERS/Alex Livesey

Manchester — Premier League and other European clubs entered the final stretch of the transfer window on Monday, with Manchester United expected to be among the busiest on deadline day.

United’s 6-1 thrashing at home by Tottenham Hotspur on Sunday has increased the pressure on CEO Ed Woodward to give manager Ole Gunnar Solskjaer some new options, having only added Netherlands midfielder Donny van de Beek so far.

Brazilian left-back Alex Telles is expected to complete a move from Porto and 33-year-old Uruguay striker Edinson Cavani, who is a free agent, is also likely to join United. England winger Jadon Sancho of Borussia Dortmund was the Old Trafford club’s number one target but there are no signs of a late breakthrough in that chase.

United are also reported to be keen on 18-year-old Uruguayan winger Facundo Pellistri, who plays for Penarol in his homeland.

The club will also be hoping to ship out some of the players who are no longer part of the main first-team squad, a task that also faces Liverpool and Chelsea among other teams.

Everton, who have had a 100% start to the season and lead the Premier League, added another defender to their squad with centre-back Ben Godfrey joining from Norwich City.

In Spain, new Barcelona coach Ronald Koeman is also keen to bring in a central defender and another striker to replace Luis Suarez who has joined Atletico Madrid. Ousmane Dembele would need to leave if Barca were to be able to clear space for another forward, with Olympique Lyonnais’ Dutchman Memphis Depay known to be a favourite of Koeman’s.

Manchester City’s Spanish defender Eric Garcia has been linked with a move back to Barcelona all through the window.

Real Madrid coach Zinedine Zidane has been insistent that he is happy with his squad, after offloading forward Gareth Bale back to Tottenham on loan.

In Italy, the biggest move being expected by the media is Juventus seeking Fiorentina winger Federico Chiesa.

Inter Milan are inevitably being linked with a number of coach Antonio Conte’s former charges at Chelsea as he looks to add to his contingent of former Premier League players.

AC Milan have been linked with Strasbourg defender Mohamed Simakan, while Fiorentina are also looking to France with Antonio Barreca of AS Monaco, on loan at Genoa last season, a target.

With no fans in stadiums fewer matches, on average, are being won by home teams
Sport
6 months ago

KEVIN MCCALLUM: With crowds absent, sport will have to go OTT