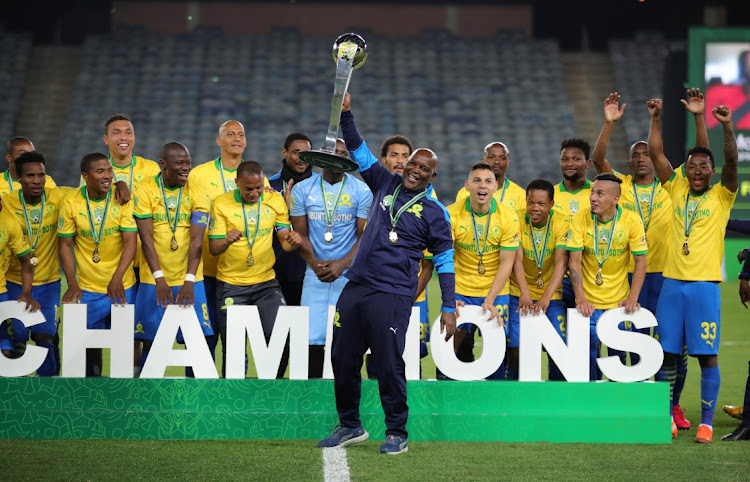 Mamelodi Sundowns coach Pitso Mosimane has distanced himself from the blunder that resulted in suspended defender Tebogo Langerman erroneously named among the substitutes in their Nedbank Cup final win over Bloemfontein Celtic on Saturday.

The Brazilians won the game 1-0 at Orlando Stadium in Johannesburg through a second-half strike from Gaston Sirino to complete the treble. But their march to the league title‚ the Telkom Knockout and the Nedbank Cup titles in the same season was spoiled by news that Celtic lodged an official complaint regarding Langerman.

By naming a suspended player among the substitutes on their official team list‚ which is in contravention of the rules of the league‚ the Brazilians needlessly plunged themselves in hot water and could face disciplinary action.

Chapter 4 of the National Soccer League’s handbook‚ which deals with protests and complaints‚ states under rule number 51.3:  “Where the protest relates to a player who is alleged to be an ineligible player‚ the protesting member club will lodge a written objection to the fielding of the player detailing the reasons for the objection‚ with referee and the opposing captain in the presence of an assistant referee no later than 30 minutes before the start of the match.”

Celtic officials did not lodge a formal written protest with match officials before the start of the game and only complained after the encounter. Langerman did not play in the match.

“I am not aware of that but I’ll ask the club. I don’t do player admin at the club‚ I focus on coaching the team‚” said Mosimane in his post-match media conference when asked if he knew Langerman was suspended after he picked up a fourth booking in the 3-0 win over Black Leopards the previous weekend.

It appears Sundowns and Celtic dropped the ball because the clubs are given an updated yellow card and suspension list by the league before matches and the two sides should have been aware the defender was suspended.

“If I have reports on certain issues‚ of course I can’t be a coach who doesn’t focus or observe those things‚ but I am not aware at this point. The management will have to tell us all about this, but you must win on the pitch. Imagine you are going to raise the trophy and, oh, by the way‚ there was this thing and then you celebrate.

“My opinion is that you must win on the pitch,” Mosimane said.

By beating Celtic‚ Sundowns ended the season with the Telkom Knockout‚ the league and the Nedbank Cup for their first treble in the PSL era. They have matched the class of 1990 that won the Castle League‚ the JPS Cup and the BP Top 8.

The PSL has not indicated if it will be issuing a statement on the matter, which has been a talking point among fans since Saturday night.