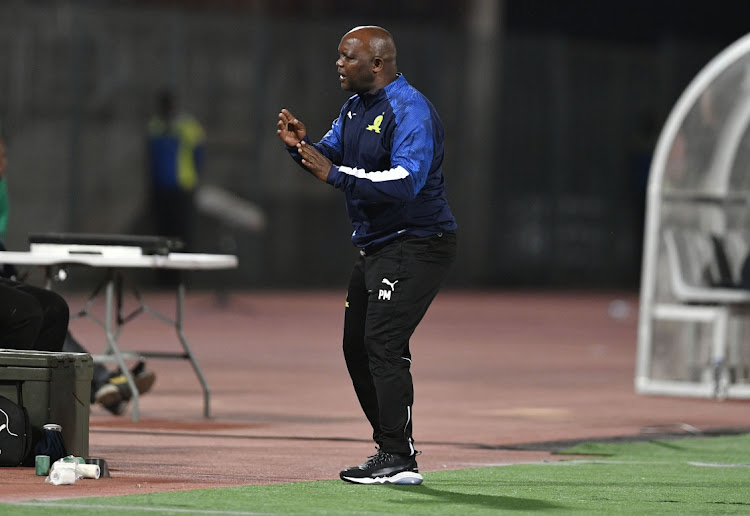 Mamelodi Sundowns coach Pitso Mosimane has offered no excuses for his side’s defeat to Baroka FC on Sunday and played down the psychological effect of rivals Kaizer Chiefs’ loss in a match played earlier in the day.

The Sundowns players stepped onto the Dobsonville Stadium pitch in Johannesburg well aware that Chiefs had been beaten 1-0 by Bidvest Wits at FNB Stadium. While  the pressure of knowing the result may have weighed heavily on their minds‚ Mosimane did not want to use this as an excuse for his side’s 1-0 defeat by Baroka.

“What can I say? One mistake, we got punished there‚ we didn’t mark in the box and a free header there. It’s unbelievable‚” said Mosimane.  He also said that he warned his charges against the aerial danger posed by Baroka.

“I warned them a few days ago. I said ‘you have defended set pieces in the [Caf] Champions League’. I mean it has been a long time since we conceded direct from a corner. And I told them not to underestimate them because they are big boys also.

“I said if we can work hard on corners and set pieces against a team that is very strong on set pieces in the league‚ that has scored about 24 or 25 goals from set pieces.”

The pressure and expectation to win weighed heavily on the Sundowns players after they conceded an early goal to Namibian Ananias Gebhardt in the first half.

Despite many changes and chances to equalise, Sundowns failed to score as the Baroka players put up the fight of their lives to help the club survive relegation and save their jobs.

Mosimane said the players had a vested interest in knowing the result of the Chiefs match, and admitted there was no other way to hide it from them.

“You see when football happens and results don’t come right‚ I’m the guy who does not want to make excuses on why we did not win.

“Whether they knew or they did not know the result [of the Chiefs match]‚ hindsight is the best sight to be honest.

“We can always speak about it, but I don’t know whether it changed their mood or not.

“And I can’t be going through players phones and say they must not know what happened.

“And they also have a vested interest to know what happened. So I don’t like making excuses because we lost.”

The defeat left Sundowns second on the table — on goal difference — level on 53 points with long-time leaders Chiefs and with two matches remaining.

Mosimane said he told his players at half-time to at least force a point if they could not manage the maximum three points.

“It’s unbelievable. It is the beauty of football and keeps everyone on the edge.

“To be honest, I am so disappointed it is not funny, you know.”