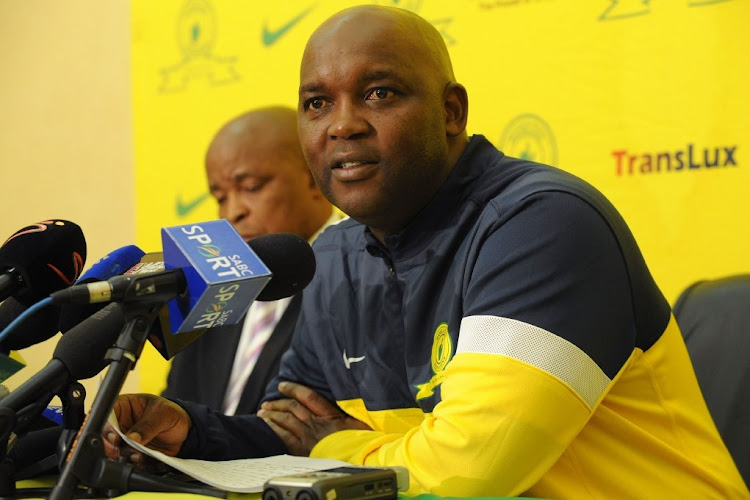 Mamelodi Sundowns coach Pitso Mosimane will not throw in the towel until it is mathematically impossible for his side to defend their Premier Soccer League (PSL) title.

The Brazilians have been struggling with their form since the season resumed earlier in August and they are six points behind long-time leaders Kaizer Chiefs as the title race enters the home straight.

Mosimane has been pulling his hair out in frustration after his team dropped crucial points in draws against Orlando Pirates and Highlands Park‚ and in a potentially damaging 3-2 defeat to Cape Town City on Monday night.

“The manner in which we are going‚ it looks like the league title is going because we have played three games‚ drawn two and lost one‚” said Mosimane.

“In the context [that] we are not winning matches … maybe it [the league title] looks like [it] is gone‚” he said.

“But until it’s mathematically proven that we can’t win it‚ we will try to win three trophies [PSL‚ Nedbank and Telkom TKO, which they won earlier in the season] this season because we have a lot of ego and ambition.

“We believe the two remaining trophies are still available even though the league is really going out of our hands.

“That is football‚ that is the story of Sundowns inside Covid-19, but we will try to fight and keep going. We are too ambitious and we can’t just leave it and say it’s done.

Sundowns were enjoying a rich vein of form with four consecutive league wins — over Stellenbosch‚ Bloemfontein Celtic‚ Chippa United and SuperSport United — before the coronavirus pandemic forced the season to be suspended in March.

Mosimane admitted they are struggling to rediscover their form and he cannot put a finger on what is holding them back.

“We are struggling‚ but we are a team that [doesn’t] struggle [without] a fight.

“We are not where we are supposed to be, but we will keep going and keep fighting until the end.”

Captain upbeat Pirates can turn their fortunes around