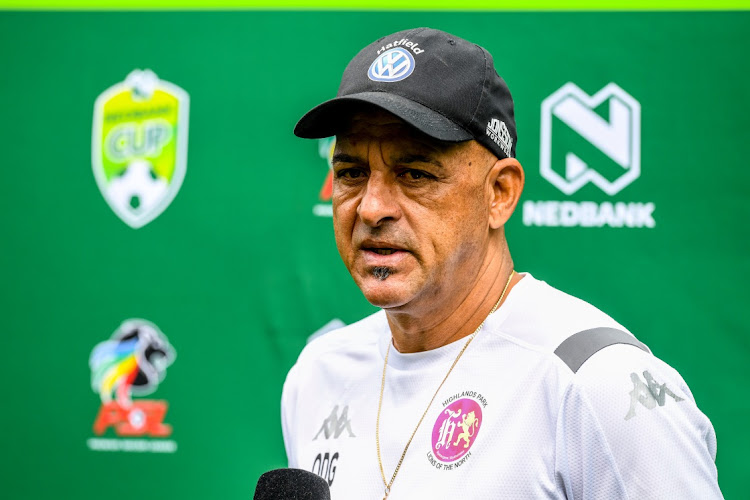 Highlands Park will get their first taste of football in the “bubble” at Dobsonville Stadium on Friday when they take on Mamelodi Sundowns in the Premier Soccer League (PSL).

Highlands coach Owen da Gama says his charges are not fully prepared. It has not been long enough since Highlands resumed training for players to be in tip-top physical condition, he says.

“Nobody can get it 100% right because it hasn’t been long since we started training, but we have tried to manage the boys as best as possible‚” said Da Gama.

“We only started playing 11 vs 11 at training last week because we had to introduce the players gradually due to the health regulations we had to follow. I started training with four players‚ moved to six‚ eight‚ 10 until we had 22 last week.”

Sundowns have already played two matches since football resumed last weekend‚ against Bidvest Wits in the Nedbank Cup and Orlando Pirates in the league.

“Sundowns have two games under their belt already and they will be a lot more prepared than us‚. But in saying that there is nothing we can do about it. We just have to be as prepared as we can be‚” he said.

“We have only played among each other at training because we can’t play friendly matches. We will see what happens on Friday.

“Having watched the matches that have been played in the PSL and National First Division so far‚ what we have picked up is the quality is still very good and there is no doubt about that.

“But we have noticed in the match against Pirates on Tuesday‚ Sundowns were getting tired in the second half.

“I am expecting an interesting game because they have beaten us twice this season and we are not happy about that. It is always very difficult to plan against Sundowns — who would have said that Lebohang Maboe will play right-back [against Pirates]?

“They can put three teams out there on any given day because they have a big squad and quality players. We will have to plan properly for them because they can introduce anyone from the bench at any time.”

Amakhosi looked to have the three points in the bag, but Wits dogged attitude paid off
Sport
9 months ago

Striker Bradley Grobler may also be sold by CEO Stan Matthews, who will entertain any good offers for the player
Sport
9 months ago

Football was good so give coaches a break, says Benedict Vilakazi

Retired midfielder is impressed by what he saw as football action returned after five months.
Sport
9 months ago
Next Article