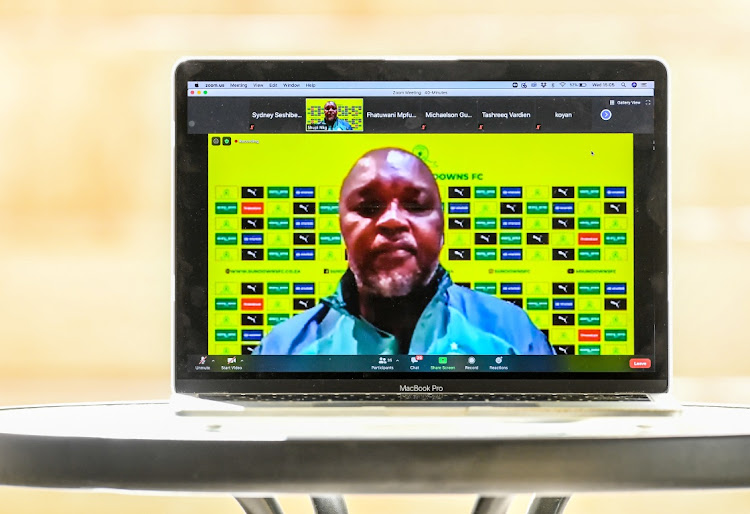 Football under Covid-19 is a whole new ball game. And to hear Mamelodi Sundowns coach Pitso Mosimane’s comments, it sounds like a whole new sport.

The first two games of the return to football saw howlers aplenty‚ sluggish play‚ a complicated five-substitution system and a level of  injuries that could result in teams running out of fit players.

Mosimane highlighted the number of injured footballers in the two semifinals.

“In the Bloem Celtic-Baroka game we saw many injuries. In our game we also had plenty of injuries,” Mosimane said. Sphelele Mkhulise could not finish and Themba Zwane, “who always finishes a game, could not finish”.

Sibusiso Vilakazi‚ “who always is in good condition‚ could not finish. Rivaldo [Coetzee] was supposed to be out. And we were preparing Wayne Arendse and Tiyani Mabunda to come on.

“That’s football under Covid-19. Players are not ready. You could see that.”

Mosimane was asked if‚ having experienced football under Covid-19‚ Sundowns have any advantage ahead of their big league match against Orlando Pirates on Tuesday.

“Football inside Covid-19 — we know it now,” he said, noting that one could only understand the situation with substitutions when you have Mkhulise suffering a muscle injury and Rivaldo being on the bench at the end of the game.

“I don’t know how many times I asked the fourth official‚ ‘do I still have a substitution to make?’ They said ‘yes you have‚ but you only have two to go because you’ve already made three’.

“It’s confusing. The halftime doesn’t count as a substitute [opportunity]. And I kept asking ... ‘Hey Lux‚ explain this thing to me’,” Mosimane said referring to PSL senior manager Lux September.

“So it’s really difficult. And you might know the rules‚ but once you are under stress and pressure‚ everything goes out of your mind. That’s football under Covid-19.

“So‚ ice bath‚ and let’s see how it goes. Until we gain progressively and we understand how it is and we will be able to manage it.

“Ja‚ big game on Tuesday. But it’s not the same games that we saw before. It’s totally different games,” he said.

The ruling on five substitutions allows for changes at halftime and at three other times during the game in an attempt not to disrupt play. That was why the injured Coetzee could not be replaced at the end.

A football club is an employer and the players are employees, so players’ contracts remain intact if it is sold, writes Sibusiso Dubo
Opinion
8 months ago

With two keepers out, Gavin Hunt turns to Brighton Mhlongo

Bakgakga have gone without friendlies and so the first games in season return will have to serve as warmups, says coach
Sport
9 months ago
Next Article

Percy Tau once more on loan at Belgian club Anderlecht

Percy Tau once more on loan at Belgian club Anderlecht