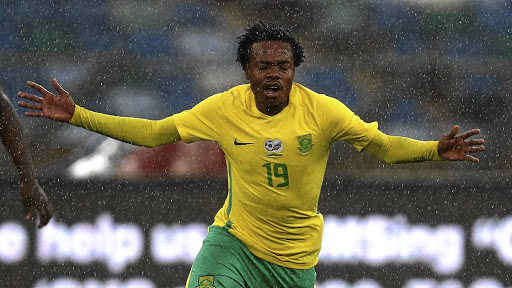 Percy Tau is likely to return to the Club Brugge line-up on Wednesday night as the Belgian club seeks to ensure a place in the lucrative group phase of the Uefa Champions League.

They host LASK Linz of Austria in the second leg of their play-off tie‚ with the advantage of a 1-0 lead from the away game last week‚ which Tau missed because of suspension.

The Bafana striker was sent off in the previous round against Dynamo Kiev‚ the first time in his career he has been shown a red card‚ after two innocuous-looking fouls in a refereeing decision that left him visibly stunned.

Tau is likely to replace Lois Openda in the line-up despite a strong performance by the young Belgian‚ who has Congolese roots‚ in the first leg in Austria where he harried the home defence and forced the early penalty that handed Brugge the vital away win.

The 25-year-old Tau has played every game — save for the tie in Austria — since arriving at Brugge on loan from Brighton and Hove Albion.

He made his debut just four days after his first training session.

If Brugge qualify for the Champions League group phase‚ it comes with the potential of €25m in additional revenue‚ plus offers Tau a huge stage to display his ability as he seeks a work permit to play in the English Premier League next season.

Brugge are heavily fancied to qualify, after which they will go into Thursday’s draw in Monaco‚ which starts at 6pm.