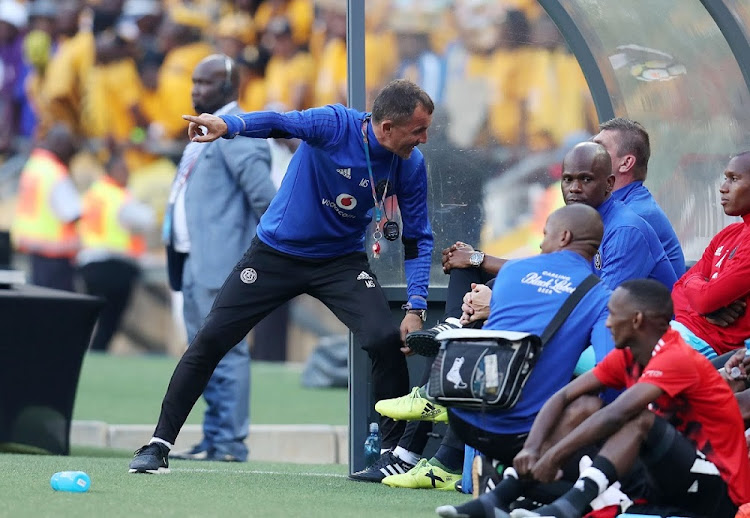 Orlando Pirates will overturn their 1-0 deficit in the second leg of their CAF Champions League clash with Zambian side Green Eagles‚ says coach Micho Sredojevic.

Spencer Sautu scored the only goal of the game in the first leg at the Nkoloma Stadium on Saturday‚ taking advantage of a fortunate deflection into his path to beat Buccaneers goalkeeper Wayne Sandilands.

Pirates were otherwise on top in terms of possession and chances‚ but failed to get a vital away goal‚ and must now overturn the deficit in the return fixture at the Orlando Stadium in a fortnight.

“We dominated in all the aspects of the game except the crucial one‚ which is to put the ball in the net‚” Sredojevic said.

“We applied ourselves very well‚ unfortunately there was a lapse in concentration at the start of the second half when we had a clear situation on the one side‚ and then from losing the ball in midfield‚ a deflected shot put the opponent in a position to score the goal.

“We did well in the buildup to reach areas where we can be dangerous, however we did not do enough to create more chances.”

Sredojevic says the Zambian side defended well after taking the lead‚ a sign of what is to come in the return leg where his side will have to be more incisive in attack to break them down.

“We played against an opponent that was injected [in confidence] by the lead. That is what kept them in resolute defending‚ the way they set themselves‚ it is not easy to unlock‚ time and space is limited‚” he says.

“We have not created enough‚ what we did create we did not convert. I have absolute confidence in my players. We believe we have what it takes.”

Asked what his ambitions were for this Champions League campaign‚ Sredojevic says he is not thinking beyond the next match.

“I won’t think about anything beyond the next 90 minutes‚ all our focus goes towards that. We respect Green Eagles.”

Middendorp in a huff at mention of Baxter rumours

Middendorp in a huff at mention of Baxter rumours