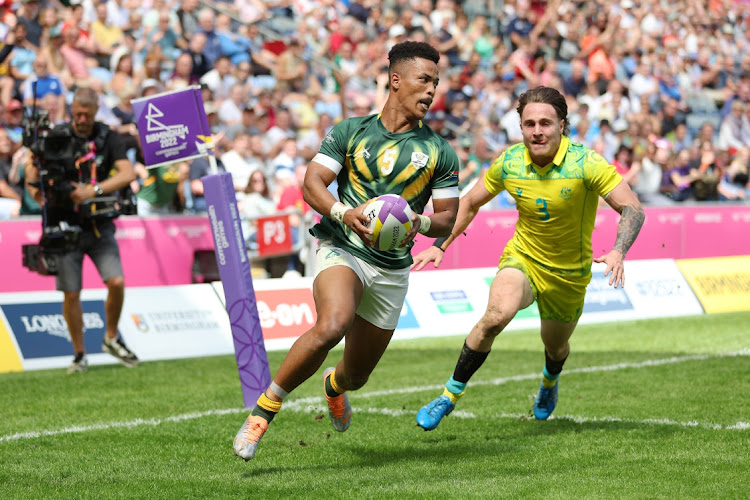 Angelo Davids of South Africa goes over to score against Australia at the 2022 Commonwealth Games at Coventry Stadium in Coventry, England, July 31 2022. Picture: RICHARD HEATHCOTE/GETTY IMAGES

Angelo Davids scored yet another hat-trick as the Blitzboks beat Australia 24-12 in their semifinal on Sunday to ensure they would win a Commonwealth Games medal.

They faced Olympic champions Fiji in the final at 10.04pm on Sunday in an attempt to win only their second gold medal in this tournament.

It is only the second time since rugby sevens was introduced to the Games in 1998 that the Kiwis will not win gold. The last time New Zealand failed to win, at Glasgow 2014, they were downed in the final by the Blitzboks.

On Sunday New Zealand led Fiji 14-0 at one stage in their semifinal, but reduced to five men they were forced into extra time, where they lost on a golden try.

Australia drew first blood when Mark Nawaqanitawase broke a tackle and went over in the left corner for a 5-0 lead.

But Angelo Davids levelled matters, collecting a grubber by Selvyn Davids to score a converted try and take the lead late in the first half.

Australia hit back, sending the ball through several pairs of hands before Matthew Gonzalez broke free to score under the posts for a 12-7 advantage.

SA had conceded only one try going into the match, but suddenly they had let through two.

But the Blitzboks took full advantage when Australia were reduced to six men when Henry Hutchinson was yellow-carded.

They swung the ball down the line and Davids went over for his second try unmarked to level matters at 12-12 at the break.

Selvyn Davids scored a great opportunist effort early in the second half after charging down an attempted kick upfield, picking up the stray ball and charging through for the line. Ronald Brown converted to push the lead to 19-12.

Angelo Davids rounded off a full line movement from a line-out to go over in the right corner and extend the lead to 24-12. He also went over three times in the pool matches against Scotland and Malaysia.

On Saturday night young guns Lara van Niekerk and Pieter Coetzé delivered a double golden sunset for SA in the pool. The swimmers from Pretoria both trailed at various points in their races — the women’s 50m breaststroke and men’s 100m backstroke — but they both battled hard to grab two victories and lift the nation to seventh on the medals table.

Tatjana Schoenmaker ended fourth in 30.41 while Kaylene Corbett, the third SA swimmer in the final, was sixth in 31.10.

The 18-year-old Coetzé, the favourite in the men’s 100m backstroke, was first into the wall, but he surrendered the lead after the turn. England’s Brodie Williams looked like he might steal the win, but Coetzé pulled through to win in 53.78.