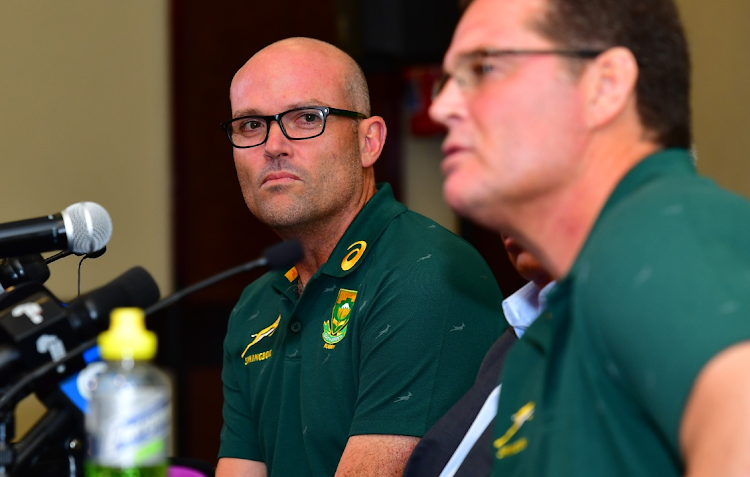 Under Jacques Nienaber, left, and Rassie Erasmus the Boks have bounced back from adversity by using their physicality. Picture: Johan Rynners/GALLO IMAGES

The Boks have been backed into a corner, and judging from their team selection it is from there they will come out swinging in the deciding third Test against Wales in Cape Town on Saturday.

Having seen Wales level the series with a late win in Bloemfontein last Saturday, the Springboks’ brains trust has assembled a team for the decider remarkably similar to the configurations they sent into battle on prior occasions when they were on the ropes.

Under the current regime two matches stand out where defeat, unlike last weekend, was not an option, and the team rallied with performances in which they significantly upped the physicality stakes.

Defeat in their opening Pool B clash against New Zealand at the 2019 Rugby World Cup meant SA had no room for error for the remainder of their campaign. As a result their match against Italy took on even greater significance in Shizuoka, and the eventual champions proceeded to pummel the Azzurri 49-3.

“We’re hurting massively,” he said after the match. “They are one of the most powerful sides I’ve seen on a rugby pitch.

“If you look at the changes they make and the explosiveness they have, they are going to be very‚ very difficult to stop.”

Then-Bok coach Rassie Erasmus had been underwhelmed by the team’s physicality earlier in the year, but declared himself proud of the manner in which his players flexed their collective muscle that balmy evening.

That happened three years ago and what does that have to do with Wales, you may ask? Well, 11 of the starters against Italy are back in the run-on team to take on the Dragons at Cape Town Stadium on Saturday.

Starters in Shizuoka, scrumhalf Faf de Klerk and fullback Willie le Roux, are now on the bench. So are hooker Malcolm Marx, loosehead prop Steven Kitshoff, tighthead prop Vincent Koch and utility forward Franco Mostert, who were growing in stature as part of the Bomb Squad in Shizuoka.

The six/two split on the bench for Saturday’s game is another strong indicator those players will be tasked with reprising the roles they played in Shizuoka and Cape Town Stadium last year after the Boks fell 1-0 behind in the series against the British & Irish Lions.

Eleven of the starters in the must-win second Test of that series are back in the run-on team, while Kitshoff, Mostert, De Klerk and Le Roux, who started that Test, are earmarked for places on the bench on Saturday.

The Boks came out swinging in a Test played in a acrid atmosphere and prevailed 27-9 by the time New Zealand’s Ben O’Keeffe blew the final whistle.

The Bok pack, coached by Jacques Nienaber, will be tasked with emptying the tank while the Bomb Squad will be required to take the intensity and physicality up a notch.

It has become Bok rugby’s default setting when the going gets tough and Wales are likely to experience it first hand on Saturday.