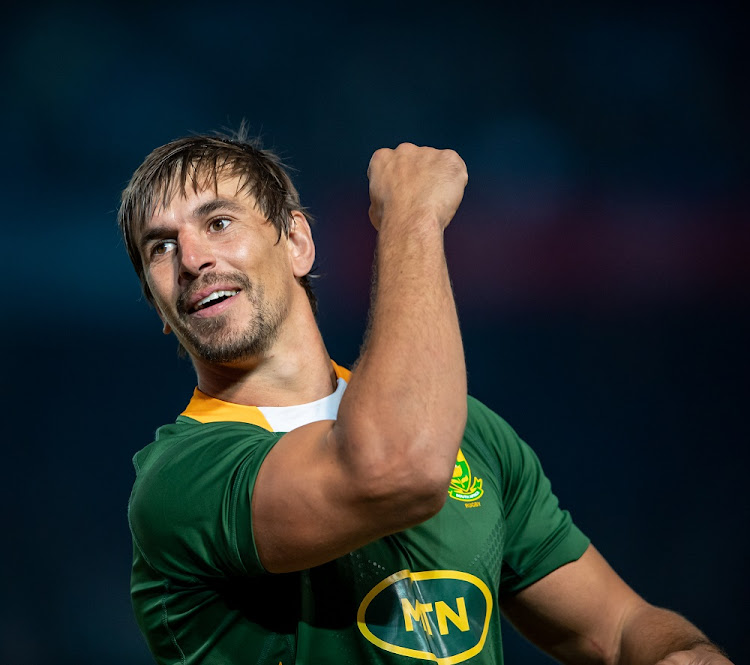 Eben Etzebeth of the Springboks during the match against Wales at Loftus Versfeld in Tshwane on July 2 2022. Picture: ANTON GEYSER/GALLO IMAGES

Former Welsh second-rower Phil Davies, who played 46 Tests for his country from 1985 to 1995, is awestruck by Springbok lock Eben Etzebeth.

Etzebeth is poised to become the seventh and youngest Springbok to reach the magical milestone when he hits the 100-Test mark against Wales in the final game of the series. Davies said the tough-as-teak forward has plenty left in the tank.

The burly 30-year-old started in SA’s 32-29 win against Wales last weekend in Pretoria. Since debuting for the national team in 2012, Etzebeth has been a mainstay of the Bok tight five and, according to Davies, has morphed into one of the best locks in the world.

“For Eben to be two caps away from 100 Tests is amazing,” said Davies, who rubbed shoulders with legendary former Springbok lock Frik du Preez at Loftus Versfeld last Saturday.

“I think Eben is a fantastic player and a real catalyst for SA’s forward play. Du Preez and Etzebeth are different types of players and it’s tough to compare generations.

“While the scrum is still the same — you have to get down and push hard — nowadays the line-out is totally different to how it used to be. The technical aspect of the lifting, the mauling and the analysis that goes on has become a science.

“In Du Preez and Etzebeth, the Springboks have produced phenomenal lock forwards. In terms of the former, the disappointing thing for me was that I didn’t see enough of Du Preez, as perhaps I would have liked over the years.

“Having played for SA from 1961 to 1971 and earning 38 Test caps, I was only eight years old when he played his last Test for the men in green and gold. But I know that he was a big, powerful player who, as they say in SA, was one of the best ever.”

Etzebeth’s plaudits as one of the premier locks in the world game is based on an impressive body of work assembled over the past decade. He has played in 14 World Cup matches with an 85% win rate at the game’s global showpiece.

Matfield remains the most-capped Springbok with 127 Tests to his name but Etzebeth, who has penned for the Sharks, could eclipse that record in the next few years.

“When it comes to bringing up his century, it’s really incredible and speaks to Eben’s motivation and resilience,” said Davies, who played at the 1987 and 1991 World Cups.

“I’m in awe of some of these players nowadays playing those numbers of games for their countries. When I think about playing more than 150 matches, which Alun Wyn Jones has done or nigh on 100 Tests like Eben, it’s unbelievable.

“Eben is a top player and has still got plenty of years of rugby left in him. He is a great set-piece player when it comes to the line-outs and scrummaging side of the game and has a fantastic work-rate around the field.”

Etzebeth has retained his starting berth for the second Test in Bloemfontein in a much-changed Bok team, with head coach Jacques Nienaber selecting six uncapped players.

The Dragons produced an abrasive performance against the Springboks in the first Test and fought fire with fire. Post-match Welsh captain Dan Biggar was bemused after being quizzed about Wales’s aggressive approach.

There was plenty of niggle in the Test, with Bok captain Siya Kolisi admitting afterwards Wales got under their skin.

“When you play against the best teams in the world you have to front up physically and particularly against SA,” Davies noted.

“The Springboks are a wonderfully gifted team in all areas of the game, but physicality is their calling card. They pride themselves on their scrum and maul and you have got to stand up to them, otherwise it will prove a long old day at the office.”