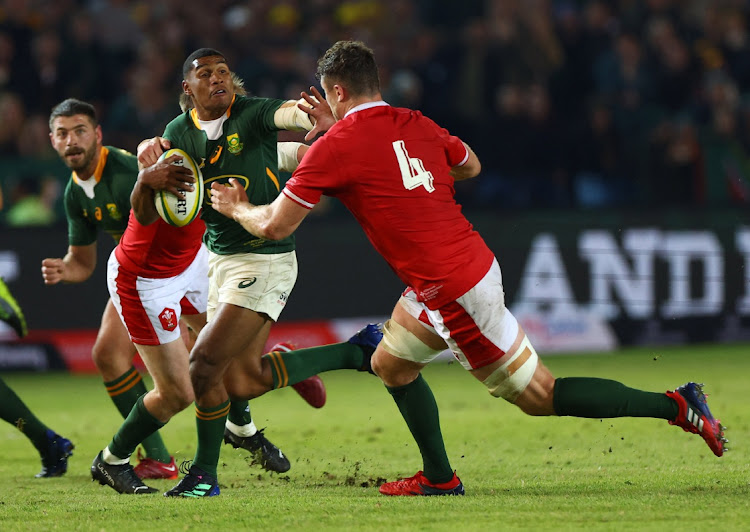 The Springboks’ homecoming in front of a live audience also proved the coming of age of utility back Damian Willemse.

Required to step up and kick a long-range penalty in the last act of the game, Willemse did what he had done all match by completing the task with poise and precision to hand the Springboks a nerve-jangling 32-29 win over Wales.

When he concluded the match-winning kick, he raised his arms, but Willemse had every reason to drop the mic en route to the exit.

You know the Boks are at opposites of the points-scoring scale when the crowd breaks into a bout of “Ole‚ olé …” and trailing 18-3 at the break, the hosts had to find a way back.

However‚ early substitutions in the second half‚ including the removal of flyhalf Elton Jantjies at halftime‚ helped provide the spark that got the Boks firing.

With Willemse‚ who started the game at fullback, moving to flyhalf, and a steady and composed Willie le Roux taking up station at fullback‚ the Bok back division got the direction that had eluded them in the first half.

The hosts scored two maul tries through Bongi Mbonambi and his replacement Malcolm Marx before Cheslin Kolbe and a penalty try helped bring the hosts back into the contest.

While the pack with Marx‚ Lood de Jager‚ Jasper Wiese and Steven Kitshoff playing leading roles got them on the front foot‚ and Kolbe teasing and tormenting at the back‚ it was Willemse who was the most compelling Bok on the day.

Though he had not played flyhalf at franchise level for the Stormers this season‚ he looked a seasoned pro in the position.

“He's an incredible player … since school‚” opined Kolbe. “Since he left school, he’s developed really fast. As a kid‚ 18 years old being thrown into the deep end, it’s been great to see the way he’s managed. He’s got experience through the years. He’s still young and he’s learning and there is still a lot more he can offer for SA and the Springboks. I’m excited by his performance and I’m sure he’ll just keep on improving‚” said Kolbe.

The man who matters‚ Springbok coach Jacques Nienaber‚ said he was happy with Willemse’s performance.

“I thought Damian did well, and like we said during the week‚ he’s a project and he’s been one since 2018‚” said Nienaber. “We’ve been slowly giving him more game time‚ experience and confidence in our system and what we’d like him to do.

“I don't know what the stats are in terms of his goal-kicking at the Stormers‚ but I do have to say that he kicked well‚” Nienaber said.

Willemse’s performance will leave the Bok management with tough questions this week. They will have Handré Pollard back up to speed for the Bloemfontein Test, but who will play as his backup? On the evidence of what transpired at Loftus‚ Willemse should retain a place in the starting team.

What the future though holds for Jantjies, who was removed under the cover of the halftime break‚ is even more opaque.

“You take a guy off once you feel he’s given everything. Sometimes that happens at 32 minutes‚” said Nienaber. When pushed further on the matter the coach said: “You have to take into account. But he hasn’t played any rugby.

“Elton played less than 30 minutes in the year. He did his shoulder and then his club in Japan didn’t make the final. The only exposure he had was training. We needed to get him in games and it will always take time for a guy who has not played a lot.

“You can train as much as you want and you put him in as many contact sessions as you can in training‚ but there is no pressure.”

Springbok hooker Mbonambi says it doesn’t matter to the players which pack is called to start matches.
Sport
1 month ago