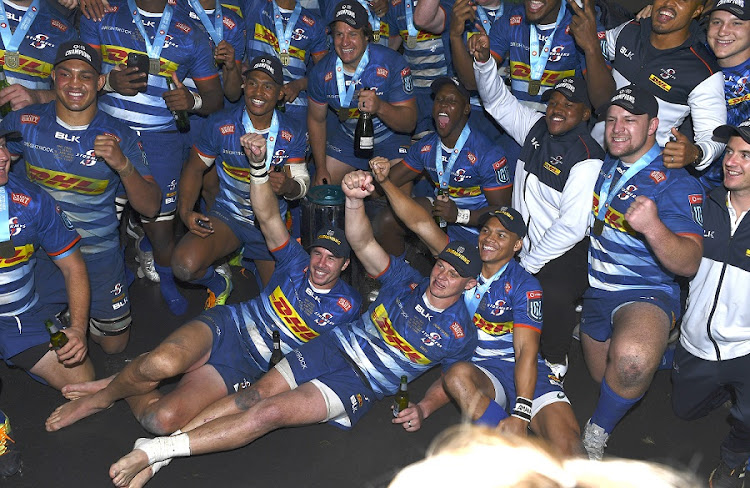 The Stormers celebrate after winning the United Rugby Championship final against the Bulls at Cape Town Stadium in Cape Town on June 18 2022. Picture: GALLO IMAGES/ASHLEY VLOTMAN

Stormers coach John Dobson proudly reflected on his team’s triumphant journey to the United Rugby Championship (URC) title but admitted he thought it might be derailed at the start.

After his team’s 18-13 win in the final against the Bulls in Cape Town, Dobson cast his mind back to the opening week of the tournament when he was on a train outside Venice and it was brought to his attention the Stormers were in danger of being jettisoned from the tournament.

They had been underperforming for some time, had just lost to Benetton, the franchise was in dire financial straights, and due to its boardroom upheaval its administration was taken over by SA Rugby.

As the train approached Venice, Dobson needed no reminding the franchise was treading water.

“It is an incredible story, where we came from. Someone phoned me saying SA might pull us out of the URC. A journalist called saying we were going to be replaced by the Cheetahs.”

The magic moment. Incredible to share it with the Faithful at DHL Stadium. Thanks to every one of you for your support. You make us more than just a rugby team.#iamastormer #dhldelivers @Vodacom #URC pic.twitter.com/5L8pth2dk9

Though they suffered more defeats on the road, the Stormers salvaged their season with an 11-match unbeaten run that included eight home wins culminating in their final victory against the Bulls.

The dramatic turnabout has restored a feel-good factor in the franchise and their status as the only top SA team without private investment may change in the not-too distant future.

“I think the stability and lack of bad news will make us an attractive investment,” Dobson said. “There is no question people are going to want to buy into Stormers rugby now.”

Of course, the clubs who wholly own the franchise will have to sanction a private equity deal and the convincing could take some doing.

“I know it is unresolved but I’m not worried,” said Dobson who needs no reminding the franchise is not out of the woods yet.

“The administration is temporary. If you are sitting as a potential investor and you saw the product that was out there, the crowd, the passion, the result on the field, we are obviously going to be a sought-after investment.”

Does it get much better than drinking out of the cup after a Vodacom Man of the Match performance in your 100th game? Nobody deserves this more than @Deonf #iamastormer #dhldelivers #brannas @Vodacom #URC pic.twitter.com/kJypmWM5wA

It is rumoured prospective investors may have to part with R180m for a controlling share in the franchise.

On the evidence of what the team achieved on a shoestring budget and the commercial potential of a team with a fervent following, there are likely to be several receptive suitors. The Stormers are a drawcard.

“We never thought we’d be able to achieve that. It was helluva important,” said the coach about the team’s pulling power at their new stadium.

“Next season people are going to want to come back. Everyone had a special experience [at the final]. We were dragged out of Newlands but this offering can be superior, in the modern era.”

The other spin-off from winning the URC is that the Stormers can potentially go into recruitment overdrive.

The coach was loath to comment on speculation that World Cup winner Cheslin Kolbe is ready to return to the Cape saying only, “We are going to bolster a bit.”