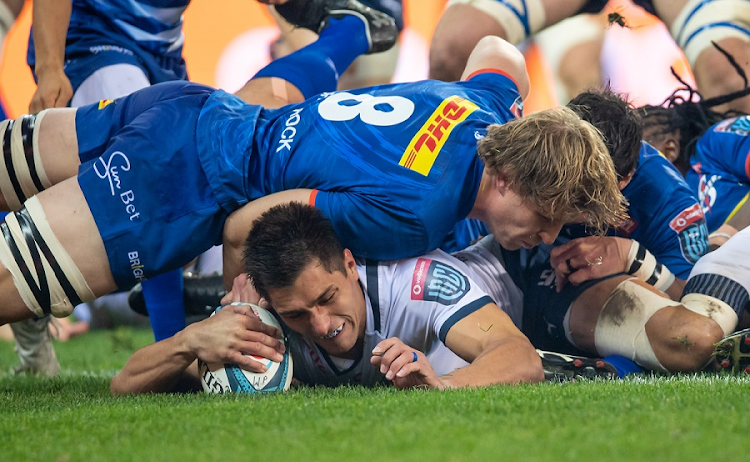 Harold Vorster of the Bulls scores a try in the United Rugby Championship final against the Stormers at Cape Town Stadium on Saturday. Picture: GALLO IMAGES/ANTON GEYSER

Bulls coach Jake White cryptically pointed to what was beyond his control in explaining his team’s 18-13 defeat to the Stormers in the final of the United Rugby Championship (URC) on Saturday.

White was loath to lay the blame at the door of referee Andrew Brace but lamented his own inability to control all aspects of the game.

“It is what it is,” sighed the coach. “I don’t think we were ever going to win that game. I thought the ref was outstanding. He saw what he saw. I couldn’t control the other things.

“There were a lot of things that we could not control. I don’t want to get into the whole thing. I told the players we are just going to have to put our heads down. When those things change we will be OK.”

One source of his irritation may be that the Stormers profited more from their incursions into Bulls territory but that the visitors often had to leave the home team’s half empty-handed.

“This hurts a bit. I thought we were out of it the whole time, for little things.”

He also lamented his team not having a bigger buffer at the break. Centre Harold Vorster burst over for an early try but the Bulls didn’t kick on. “We had enough chances at the beginning of the game to win the game.”

The vastly experienced World Cup-winning coach downplayed the travel demands placed on his team who had to journey back from Ireland, where they played a semifinal.

“The only difficulty about this was we didn’t know until the final kick that we had to come home,” White said about Manie Libbok’s conversion that secured the Stormers’ win in the semifinal against Ulster.

“It’s not that it is far but you didn’t know what to do. The rules are you can fly business class but you can’t do that on one aeroplane. Some guys flew to Qatar, some Emirates [Dubai], some Frankfurt, some Paris in groups of five and they loved it.”

White, who has enjoyed amazing success at the Bulls, has found the Stormers a thorn in his flesh this season. It was his team’s third defeat against the Cape side this season.

The Bulls started positively enough scoring an early try but the Stormers also committed tactical folly by kicking away too much possession in the first half.

“We knew there was going to be a lot of emotion at the start of the game,” said Stormers captain Steven Kitshoff. “We had a chat behind the poles and looked at the job at hand. It was amazing how mature the guys were. Getting back to the plan.”

Fullback Warrick Gelant, playing in his last game for the Stormers before joining Racing 92, was instrumental in turning around the hosts’ kicking game.

“When Warrick plays well I can’t claim it, when he plays badly I can’t claim it,” said Stormers coach John Dobson. “You just never know what is going to happen with him. Racing can have that problem now.”

“What an amazing story,” crowed Dobson. “He’s 35 and becomes a Springbok and he got the Man of the Match award. Our fight was epitomised by Deon’s work at the breakdown. He made a huge difference.”