‘He must be proven guilty’: Bok coach Nienaber not clipping Jantjies’ wings 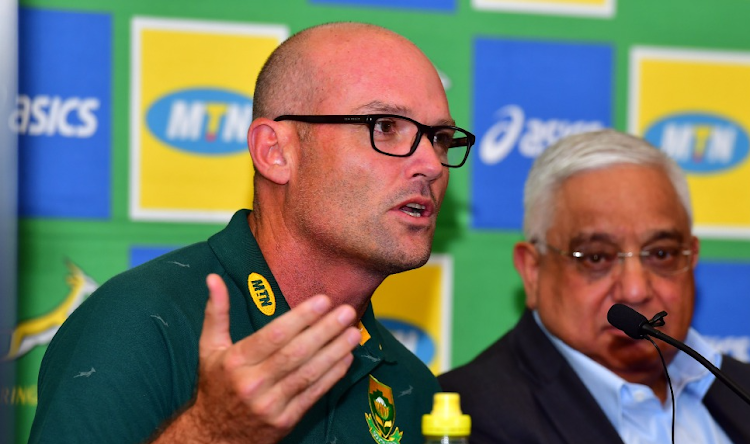 Elton Jantjies has not been found guilty of a crime and is thus very much part of the Springbok preparations ahead of the Test series against Wales‚ the team’s coach, Jacques Nienaber, insists.

Jantjies‚ arrested and charged with malicious damage to property and contravening the Civil Aviation Act after a flight from Dubai, has been a permanent member of the Bok set-up under Rassie Erasmus and Nienaber.

The latter made it clear that until new information comes to light Jantjies will remain part of the squad.

“Elton wasn’t in camp when the alleged incident took place‚” said Nienaber. “As we get information we will handle it.

“To my knowledge Elton hasn’t been found guilty of anything. That is the way we are handling it.

“He must be proven guilty of something. Other than that we are working with him on the rugby stuff here in the camp.”

Jantjies’ court case has been postponed to June 17.

The Springboks took a similar wait-and-see approach when Eben Etzebeth was accused of assault and using racial slurs in an altercation outside a Langebaan drinking spot in 2019.

Nienaber‚ meanwhile‚ is ramping up preparations for the three-Test series against Wales in July. In the absence of the Stormers and Bulls players who are still engaged in the United Rugby Championship (URC) he has assembled 17 players to a training camp in Pretoria.

When quizzed why players such as the Bulls’ Marcell Coetzee and the Stormers’ Warrick Gelant have not cracked the nod to his preparation camps Nienaber was coy and said the Springbok squad has not been named. He also stressed the players are still involved in the URC.

“That is the reason why we have delayed the announcement of the squad because they are still with their URC squads. They must perform. I’m not going to speculate on players who are not in the squad. The moment the Sharks dropped out we pulled their players in.

“It will be the same with the other players when their teams fall out.”

Both Coetzee and Gelant have been in outstanding form in the URC and have been critical to their teams’ march to the competition’s semifinals.

In fact‚ both were selected in a Dream Team based on performances in the league stages of the tournament.

With 15 months to go before the next Rugby World Cup‚ Nienaber said he was keen to develop the Bok game and squad depth this year. The Boks went into last season undercooked and simply did not have time to broaden their base whether in game or squad development.

He explained his intentions with squad development. “That can mean getting youngsters in but also getting more experienced players into play.”

The coach is also aware the foreign-based players have been operating on a different schedule and that he needs to be brought up to local speed.

“We just have to box smart to create a development block for our international players. We’ve got specific times in the calendar where we will be able to put players into a block‚” said Nienaber.

The coach added that while he has a fair amount of clarity about the look of his 42-man squad‚ he is less clear about his starting XV for the first Test at Loftus on July 2.

“We have a good idea of what the squad would look like. We will have to look at injuries‚ when people joined‚ with whom have we had a lot of contact‚ so there will be lots of things that influences what the team will look like against Wales.”