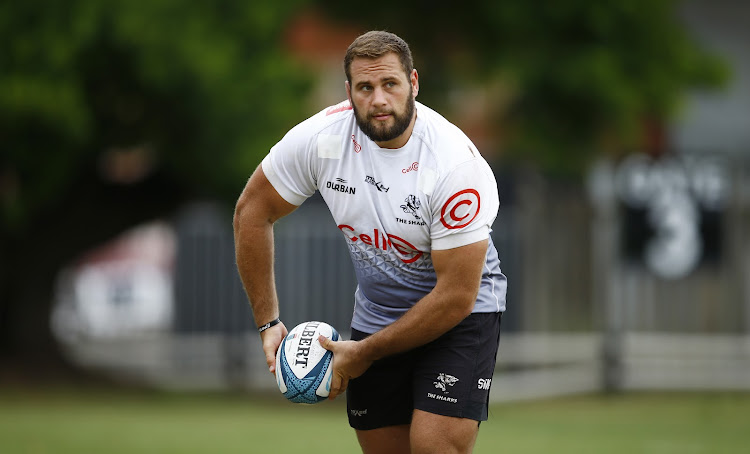 Thomas du Toit of the Sharks during a training session at Kings Park on March 15 2022. Picture: Steve Haag/Gallo Images

The Sharks and a number of other teams — except log leaders Leinster, who have secured their place in the next round — are battling it out for the remaining seven knockout spots with only two games to go. Teams that finish in the top eight will proceed to the knockouts, but the top four finishers will host the quarterfinals.

The Durban team are in the top four, and Du Toit said they will be aiming to keep it that way as they want home ground advantage. The Sharks play Irish sides Connacht at Kings Park on Saturday and Ulster in Ireland on May 20.

“We are not aiming at being in the top eight. We are aiming to get a home quarterfinal spot,” Du Toit said.

The Springbok second-rower is pleased at how the SA teams have managed to overturn their tough start to the URC as three — the Sharks, Bulls and Stormers — are in the running for the quarters. While the youthful Lions are not in contention for the quarterfinals, they have had a strong performance in the second round of the URC round robin stage.

“I think most of the SA sides felt like they got a  bit of a punch in the face when this competition started,” Du Toit said.

“We didn’t know what to expect but now that we’ve sussed things out a bit it feels like most SA teams have turned the tide and said, ‘We are sticking to our guns and do what South Africans do well,’ and they [the European sides] have to deal with that.”