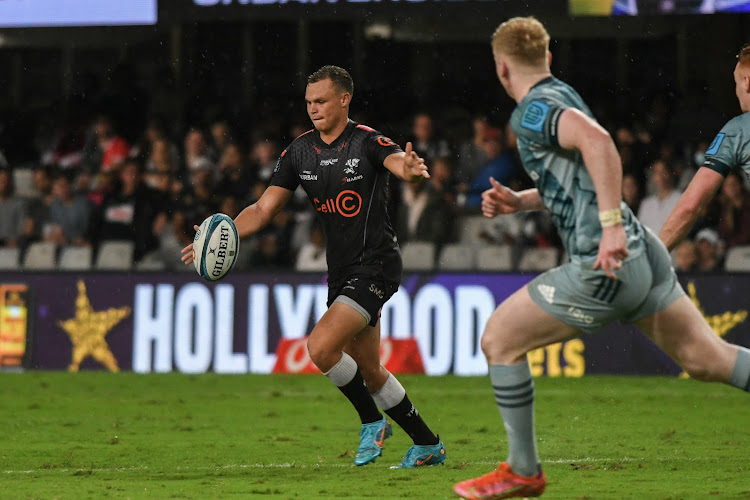 Curwin Bosch of the Sharks during the United Rugby Championship match against Leinster at Kings Park on April 23. Picture: Darren Stewart/Gallo Images

Sharks coach Sean Everitt is happy with how his first-choice flyhalf and sometimes maligned Curwin Bosch is proving his doubters wrong.

Bosch was one of the influential players for the Sharks when they claimed a bonus-point 28-23 victory over United Rugby Championship (URC) log leaders Leinster at Kings Park in Durban on Saturday night.

Everitt’s men were made to dig deep to beat the log leaders, who came to SA without some of their experienced stars.

Bosch had a shaky start to the match as he missed two penalties in the opening 15 minutes. To be fair, one of those was from the Sharks’ own half (58m) and he narrowly missed.

The 24-year-old has struggled with confidence and saw his performance take a knock in 2021, when he found himself at a crossroads on whether to stay at the Sharks or move on.

Everitt’s belief and continued backing of Bosch might be the reason the player is still in SA, or at the Sharks.

“We are happy for him. Curwin has been criticised a lot and I was criticised for selecting him, but my feeling is that form is temporary and class is permanent,” Everitt said.

“He is certainly starting to show that he has an all-round game. When he missed those kicks against Edinburgh that night everyone criticised him for his performance. But his performance was good apart from the goal kicking.”

At the beginning of April Everitt said some of the criticism of the player was unfair. After this weekend’s game the coach pointed out that Bosch has grown as a flyhalf and shown major improvements.

“His defence has improved, his tackling percentage weighs up in the 90s and that used to be a weakness and tonight [Saturday] we saw what he can do with the ball in hand,” Everitt said.

“He countered well, he took the ball to the line, he made the right decisions on attack. I’m happy with where he is and I’m proud of how he has stood up.”

The victory propelled the Sharks to fourth spot on the log with only two games left before the quarterfinals.

Next, the Sharks have another Irish team in the form of 10th-placed Connacht at Kings Park on Saturday (4.05pm). Connacht will go to Durban in high spirits after their 33-30 win over the Lions in Johannesburg on Saturday.

Stormers’ loss of Fourie a setback ahead of Warriors clash