Defeats to Fiji and Argentina cost SA, who failed to get into the Cup semifinals 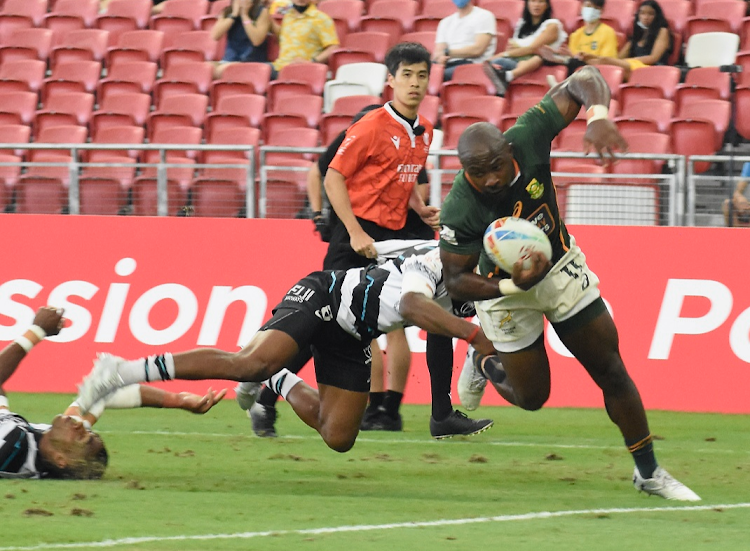 The Springbok Sevens team came up short in the defence of their HSBC Singapore Sevens crown on Sunday when they suffered defeats against Fiji in the Cup quarterfinals and Argentina in the fifth-placed semifinal.

The 19-14 loss against Fiji meant the Blitzboks failed to get into the Cup semifinals for the first time in 12 tournaments and, coupled with Saturday’s pool defeat to the USA, they lost three matches in a row for the first time since 2020.

The Blitzboks are still top of the log after winning the opening four tournaments of the 2022 World Rugby Sevens Series.

In their 22-25 defeat against Argentina, two yellow cards proved costly to the Blitzboks, who started the day without the services of the injured Sako Makata and Lubabalo Dobela.

On both occasions Los Pumas capitalised on the extra player and scored tries, making the Blitzboks’ comeback more difficult.

Argentina jumped into an early 7-0 lead when Gaston Revol stepped inside an over-tracking defence. When Selvyn Davids was binned for a high tackle, Augustin Fraga was the beneficiary of the South Americans’ higher numbers, his try giving them a 12-0 lead.

The Blitzboks came back with a well-worked try that saw JC Pretorius dot down to give them something to play for in the second half.

Davids scored a try in the second half to cut the lead to two points, but when Ryan Oosthuizen was sin-binned, Fraga got a second to extend the lead again.

With a minute left, World Rugby’s Sevens Player of the Year Marcos Moneta stepped around a number of defenders to score and though Impi Visser got one back in the final play of the match, that was it for the Blitzboks and their Singapore defence.

Earlier on Sunday, the Blitzboks came desperately close to overhauling Fiji, but dropped a close result that knocked the SA side out of a podium finish.

The Blitzboks only had themselves to blame. They conceded easy tries against Fiji, who scored in the third and fourth minutes to jump into a 12-0 lead, and again in the first minute of the second half after confusion among the SA defenders.

Zain Davids scored just before the break to cut the Fijian lead to 12-7 but with the early second-half try the men from the South Pacific extended their lead to 19-7.

Credit to the Blitzboks, who not only scored another converted try via Siviwe Soyizwapi, but in the final play of the match worked Darren Adonis over in the corner. The TMO ruled that he was tackled into touch before grounding the ball and the opportunity and match were lost.

Six of the best … Blitzboks carry on winning

Six of the best … Blitzboks carry on winning