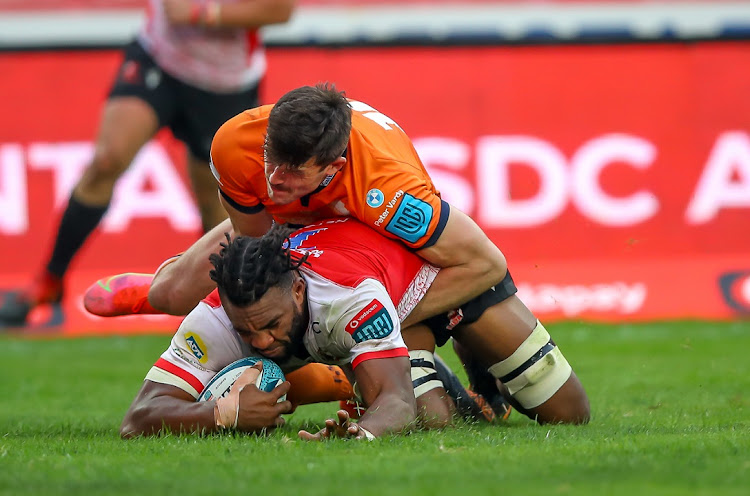 Lions forwards coach Albert van den Berg is predicting a forward-dominated tussle when they take on the Sharks in a United Rugby Championship (URC) clash on Saturday.

Inclement weather has been forecast for Durban and Van den Berg‚ who is familiar with that region after his playing years with the Sharks‚ knows the game will be reduced to an arm wrestle up front.

“There will be lots of scrums‚ line-outs and mauls‚” said Van den Berg. “They also have a kicking game they will add to that.

“We know what we are going to do against the Sharks. It looks like it is going to rain. Then it becomes a forward-dominated game and we will have to lay the foundation in scrums‚ line-outs and mauls. If we can counter them there and make sure of the kicks, then we are in with a shout.”

Van den Berg is particularly wary of the all-Springbok front row the Sharks can potentially push into battle.

“They are solid with Ox Nché‚ Bongi Mbonambi and Thomas du Toit upfront‚ but we have worked hard and must make sure that carries through to the game.”

The Lions have risen to the challenge presented upfront by European opposition in recent weeks and that experience will stand them in good stead in Durban. They have had to deviate slightly from the high-energy game that made them a feared team at Ellis Park in Super Rugby. The Lions are able to slug it out at close quarters when the occasion demands it.

Their four home wins in a row have given them momentum and‚ as Van den Berg explained‚ that came on the back of continuity in selection.

“We got to a stage where we could pick more or less the same team maybe with one or two changes‚” said the erstwhile Bok lock.

“When we played the SA teams there were lots of changes with guys in and out of the team as a result of injuries. Everyone understands their role and that makes a big difference. We take a lot of confidence from that‚” he said.

That clarity of thought was further fuelled by being unburdened by expectation. “We don’t look too far ahead to see where we will finish in the tournament. We just try to make sure we prepared well for every game,” Van den Berg said.

The way they prepare for matches has coincided with the return from injury of lock Reinhardt Nothnagel. He has also been responsible for their biggest area of improvement.

“Having Reinhardt back is great. He brings a lot of calmness to the lineout. Everyone can focus on their job. He is the general there. They all listen to him.”