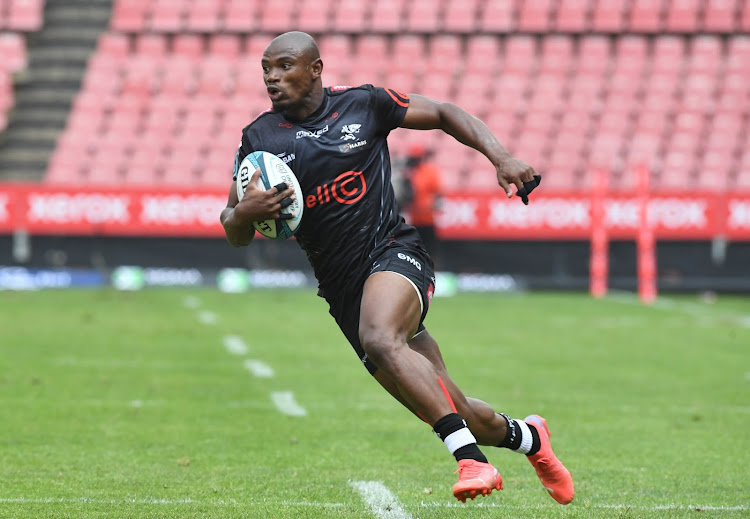 Sharks coach Sean Everitt hailed wing Makazole Mapimpi and centre Lukhanyo Am as probably the best players in the world and also superb team men after they helped his side to a vital 47-37 win over the Lions.

Try-machine Mapimpi dazzled with a hat-trick of tries and Am was his usual polished self as the Durban franchise notched an important win on the road at Ellis Park.

“The type of rugby you play is dependent on the players you have at your disposal,” Everitt said. “The likes of Makazole Mapimpi, Sbu Nkosi, Aphelele Fassi and Lukhanyo Am are guys who can nail opportunities when they pop up out of nowhere.

“That is what happened and it is why we won the game. Some of these guys are the best in the world in their positions. Mapimpi must be the best left-wing in the world.

“We talk about Cheslin Kolbe, and rightly so, but every time Mapimpi plays he gets over the chalk, domestically or internationally. Lukhanyo has been absolutely superb, he is probably the best 13 in the world.

“And it is great that they perform like this for their franchise. They want to pay back to us.

“Sometimes you get players that perform on the international stage but don’t come to the party for their clubs or provinces. But our Boks are great people and we are so happy to have them at the Sharks and to see the pride they have in playing for us.”

Next up for the Sharks is a home game against the Stormers at Kings Park on Saturday.

“Our frustration in the Lions game was in our kickoffs, both sending and receiving,” Everitt said. “Both teams were not good in that area. We were never able to get away on the scoreboard because of that, so it is a big work on for us.”

The Sharks will be boosted by the return of two more Springboks in Siya Kolisi and Bongi Mbonambi, both of whom will be available for selection this week after having completed their conditioning programmes.

“It’s been a bit of a stop-start affair,” Everitt said. “First of all, we were away for four weeks for the European tour and obviously with the international players missing and they came back. It’s a bit frustrating that we can’t string games together.

“But now we have that opportunity and it really bodes well for all the SA teams going forward that they can build some continuity in selection, and certainly as far as cohesion is concerned,” he said.